- Turkey kept their Euro 2016 qualifying hopes alive with a hard-fought 1-0 win away to bottom side Kazakhstan thanks to a late Arda Turan's strike in their Group A game on Friday.

The visitors, who handed Kazakhstan their heaviest ever home defeat when they beat them 6-0 last time the teams met in Almaty in 2006, dominated the game but missed several chances.

Turkey's top scorer in qualifying, Burak Ylmaz, missed the target in the 53rd minute and hit the woodwork 20 minutes later.

But it was Yilmaz who set up Arda Turan to score what proved to be the winner in the 83rd minute in a tough match.

Third-placed Turkey are on eight points after six games ahead of the Netherlands, who have seven from five and were visiting Latvia later on Friday when group leaders Czech Republic, on 13, were away to second-placed Iceland who have 12.

Kazakhstan, who have one point, opened their account with a 0-0 draw at home to Latvia but have lost all five of their subsequent fixtures.

The top two qualify for the finals with the best third-placed finisher in the nine groups. The eight remaining third-placed teams play off to determine the last four qualifiers.

New coaches for Besiktas and Fenerbahce !

Besiktas has signed Turkish manager Senol Gunes for two seasons with an option to extend his deal for a further year.
The Istanbul side said that Gunes will receive 1.5 million euros ($1.69 million) for the 2015-16 and 2016-17 football seasons.
According to the agreement, Besiktas will pay Senol Gunes 500,000 euros as compensation his contract is terminated prematurely after the first season.
Sixty-three-year-old Gunes managed Bursaspor last season.

Fenerbahce has appointed Portuguese manager Vitor Pereira for two years.
Releasing a statement on Thursday, Fenerbahce said: "Portuguese Vitor Pereira, who worked for Greece's Olympiacos last year, has been appointed as new coach of Fenerbahce football team with a two-year deal."
Pereira started his coaching career at the age of 34 with Portuguese clubs Padroense and Porto's youth team. The manager, who retired from playing professional football at the age of 28, enjoyed his premier first-team spell with San Joanense in the 2004-2005 season.
The Espinho native was Andre Villas-Boas' assistant manager at Porto in the 2010-2011 season; he managed the team to the Portuguese Super Cup Final against Vitoria Guimares in 2011.
The Portuguese manager was able to bring success to Porto in the 2011-2012 season, finishing as champions in 30 matches with 75 points. He continued his success with the team, becoming champions the next season with Porto as well.
After staying with Saudi Arabian team al-Ahli in the 2013-2014 season, the 47-year-old moved on to Olympiacos in January 2015.
With Pereira, Olympiacos won the Greek domestic cup and championship this year.

In addition to the Turkish Spor Toto Super League title, Galatasaray has been crowned Ziraat Turkish Cup winners this season

Bursaspor, 3-2, to win the 2014-15 Ziraat Turkish Cup at the Bursa Ataturk Stadium in Bursa on Wednesday.
In the 25th minute, home team Bursaspor were awarded a penalty on account of Galatasaray’s left-back Alex Telles. This allowed Bursaspor’s Fernandao to score, 1-0.
In the 40th minute, Galatasaray equalized when their Turkish striker Burak Yilmaz finished in the far post, 1-1.
In the 48th minute of the second half, Galatasaray came back when Yilmaz again finished in the one-on-one position. Selcuk Inan made a deadly through ball to his teammate, 2-1.
Bursaspor scored the equalizer in the 58th minute, Volkan Sen then put the ball into the net, 2-2. Fernando Belluschi made a classy heel pass.
Galatasaray striker Yilmaz hit the target just a minute later to allow Galatasaray take the lead once again, 3-2. Yilmaz scored a hat-trick for his team.
Galatasaray captain Selcuk Inan lifted the trophy at the ceremony.
Apart from the Spor Toto Super League title, Galatasaray has been crowned Ziraat Turkish Cup winners this season, allowing the Istanbul giants to do a “double”.
Galatasaray lastly did a “double” in the 1999-2000 season.
Lions are the most time winners of the Turkish Cup with 16 titles. Moreover, reigning Ziraat Turkish Cup championsGalatasaray also retained the title in the domestic tournament.
Source : AA NEWS AGENCY
Posted by TURKISH FOOTBALL BY AHMET BOB TURGUT No comments:

It was up and down for three Turkish giants all season long !

Galatasaray ,Besiktas and Fenerbahce occupied the top spot most of the time...

Akhisar hold the top spot earlier in the season in the third and fourth weeks.

Because of the teams could never open the point gap between them ,the gap was only one or two points most of the season !

For the first time , Galatasaray opened the gap three points in the 22th week....

I knew this chase would go down to the wire !

Fenerbahce and Besiktas could not perform like Galatasaray in the last five weeks ...

When I was in Turkey, Besiktas loss 10 points !

Besiktas problems started in the 30th week after a draw against Gaziantep in Ankara !

Following week, Besiktas had a another draw match this time against Akhisar....

In the 32. Week, losing against Konya was  disaster for Besiktas !

Fenerbahce was the only team to give challenge to Galatasaray ....

That hope was demolished for Fenerbahce in the 33th week when Fenerbahce draw against BasakSehir !

Besiktas was young  team,they could not handle the pressure!

As far as Fenerbahce, their coach Ismail Kartal  made some crutual mistakes at the end of the tunnel!

His coaching from sideline was not that great......

On the other hand , Besiktas coach Bilic made some crutual mistakes in the crutual weeks .

That was costly for Besiktas too !

The team who started the league with coaching caos Galatasaray, started this race with bad start but finished on top at the end of the season .

In the 3rd week, Galatasaray was in 9th place in the league with 4 points!

When their Italian coach Prandelli left in the 10th week, Galatasaray was only one point behind
Besiktas .

Because of poor Euroapian performance.

The new coach Hamza Hamzaoglu came in and picked up from there !

Players like ,Muslera and Sneijder was plus for his accomplishment .....

Galatasaray won their 20th Championship title in Turkey and earned their four star.

They were the clutch team.

There are many tough matches  in the nex five weeks.

Besiktas and Galatasaray with 64 points and Fenerbahce 63...

Later on  in May,  Galatasaray vs Besiktas match will decide this race,in my opinion !

Alex Telles, is suspended from the match at Turk Telekom Arena while Galatasaray midfielder Hamit Altintop will miss the game due to calf injury.


Other title contenders Fenerbahce will be playing away to Medicana Sivasspor on Saturday.

Fenerbahce may lack their Portuguese regular Bruno Alves playing as a centre-back, while Alves is suspended.

Fenerbahce come in third with 63 points.


Leaders Besiktas will meet Gaziantepspor at Osmanli Stadium, in Ankara on Sunday.


Besiktas are leading the league with 64 points by goal average.

Fenerbahce back on top !

Fenerbahce took the lead in the Turkish super league after defeating Bursaspor 1-0 at Fenerbahce Sukru Saracoglu Stadium, in Istanbul, on Monday night.
Fenerbahce striker from Cameroon, Pierre Webo, broke the deadlock by scoring in the 84th minute. They now lead the Spor Toto Super League with 59 points in week 27.
Trabzonspor stunned Galatasaray 2-1 in Trabzon on Sunday. Trabzonspor snatched the win thanks to goals by Ozer Hurmaci and Carl Medjani. Galatasaray's goal was scored by Emre Colak. Galatasaray now find themselves in third place with 58 points.
On Saturday, Besiktas eased past Kasimpasa 5-1 in an away match. Mustafa Pektemek, Demba Ba, Ramon Motta, Olcay Sahan and Jose Sosa all scored for Besiktas. With 58 points, Besiktas are in second place thanks to a favorable goal average.
Bursaspor striker Fernandao lead the league in goals with 17. Besikta's Demba Ba is second with 16 goals and Trabzonspor's Oscar Cardozo is third with 15. 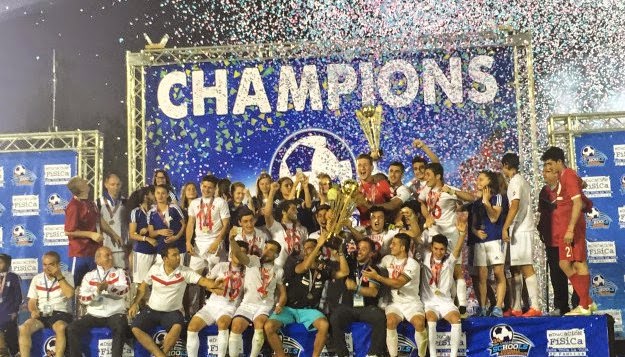 A high school team from  Trabzon, Turkey  has scooped the World  High Schools Championship Football 2015 title after beating a Brazilian high school team in the final match.
The team achieved victory after winning the match 2-1 on Monday.
The Trabzon Erdogdu Anadolu High School is the second high school team from Trabzon to win such a title, after Trabzon High School won the championship organized in China’s Shanghai in 2003.
The International Federation of official school sport organizations (ISF) organized the World High Schools Championship Football 2015 in Guatemala’s Retalhuleu city from April 12 to April 20.
School director Ali Turan said: “Our children made history on the other side of the world.
“We are very happy to return to Trabzon with the cup.”
He said that all the 18 players were part of the Trabzonspor’s Under-18 and Under-17 teams.