Alvaro Morata scored twice as defending champion Spain cruised to a 3-0 victory over Turkey on Friday in Nice, France, to qualify for the knockout stages of the European Championship


The holders doubled their advantage within three minutes, Nolito turning goalscorer this time, taking advantage of a poor Mehmet Topal header to finish from close range.


Morata added his second, and Spain's third, shortly after the restart, finishing off a lovely team goal that also involved Andres Iniesta and Jordi Alba, with Turkey unable to create clear chances of their own.

Fatih Terim's men, meanwhile, are facing an early exit from Euro 2016 after losing their opening two matches at the finals without scoring a goal.


Morata retained his place up front for Spain and he forced a good save from Babacan after five minutes, spinning into space and firing a 20-yard drive towards the near post.

Spain's goalscorer in the opening 1-0 win against Czech Republic, Gerard Pique, then had a great chance from David Silva's corner but he misjudged his header, the ball bouncing over the crossbar.

Hakan Calhanoglu whipped a free-kick just over David de Gea's crossbar after 26 minutes, before Nolito collected a pass from Iniesta and curled a shot narrowly wide of the post.

The lively Nolito created the opening goal for Spain after 33 minutes, the Celta Vigo winger finding space to curl in an excellent cross that Morata glanced in.

Spain, who have only ever lost once to Turkey, then scored again almost immediately.

Cesc Fabregas clipped a lofted pass over the Turkey defence and Topal could only head the ball up into the air, Nolito reacting sharply to slide the ball beyond a helpless Babacan.

Spain showed no signs of mercy after half-time, becoming the first team at Euro 2016 to score three goals in a game shortly after the interval.

Iniesta bisected the Turkish back line with a superb trademark throughball, with the possibly offside Alba unselfishly squaring for Morata to finish neatly through the legs of Babacan.

Morata then planted a header just wide, as he sought to complete his hat-trick, before Burak Yilmaz spurned a fine chance to get Turkey back into the game, shooting wide from a great position.
Spain continued to press, substitute Bruno Soriano forcing a solid stop from Babacan, who also kept out Pique after 68 minutes.

The frustration of Turkey's fans was clear, as they began to whistle playmaker Arda Turan, who struggled throughout.

Del Bosque's men eased off in the closing stages, but their dominant performance will send a message to the other pre-tournament favourites that they are more than ready to defend their title again as they head for their Group D closer against Croatia in Bordeaux.

Spain became the first team in the competition to score three goals in a game. Its victory left it top of Group D with a maximum six points and through to the next round.

Turkey's second-straight defeat hasn't quite ended its chances of progressing but it will most likely need to win its last game against the Czech Republic to stand a chance.


"Today our national team threw in the towel," Turkey coach Fatih Terim said. "I have never accepted this and I will never accept it ... I'm deeply upset."

Turkey also faces a fine from UEFA after its supporters used flares and a smoke bomb in the stadium, and repeatedly threw firecrackers onto the field after the final whistle.

NOT A GOOD START FOR TERIM AND HIS BOYS ! 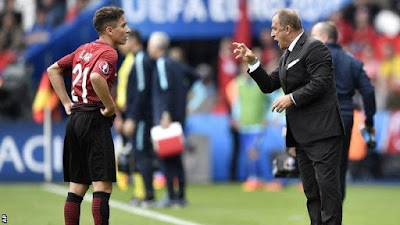 
All the build up before this,  Turkish fans believed in Terim and his boys ..

Whole 90 and plus minutes, Turks looked confused on the pitch and on the sideline too!

Passing at the midfield was awful ...

Turkey had their only shot on goal was in 30th minute ...

That was the header by  Ozan Tufan , who should have scored that instead he gave to the keeeper !

Croatia scored from 25 meters by Modric !

Turkish Goalkeeper Volkan Babacan mad a huge mistake as far as timing and following the ball in the atack .


As I mentioned this, on my blog before, Turkey's biggest problem is the defence and in the middle !

Also, whole team is having problem stretching the match to ninty minutes....

Arda Turan has been biggest disappointment along with Burak Yilmaz ...

That's why , Fatih Terim took him out in the second half after he lost the ball one and one !

He is  not ready to hussle and bussle on the pitch....

Here is the problem , with Terim's line up , against  Crotia  !

Too many players has not played full matches in their teams...

Lack of playing time and not being ready was huge risk taking by Fatih Terim....

So, as Terim said after the match Turkey has to start first, to say it's not over ,until we say, it's over !

He said, Turkey always starts the big tournaments like this...

One good thing about in this match, Emre Mor  became the youngest player to play for Turkish National Team  who came in the match in the 69th minute .

I think, Emre Mor is very smart and bright young player who does wonder things with the ball !

Even though he is only 18, he is more energatic and claver most of the players on the team..

He plays with his heart and brain with endless energy ..

Terim is hoping, he could change the outcome of the scores against Spain on Friday ..

I think, he will do some changes in the lineup against Spain..

After Spain, they will face Czech Republic ...

Two important match is waiting for Terim and his boys.

It's not over but, Spain match, coming up on Friday is very important !

All the buildup by Turkish football fedaration could end up with disaster if they don't advance from the group !

Could the comeback kids  , comeback ?

Not the way they played on Sunday against Crotia ! 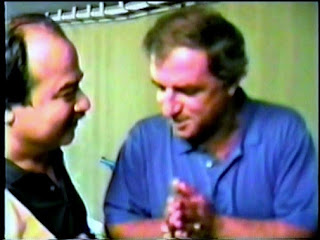 
This is very historical for Fatih Terim !

It's  his third spell with Turkish National Team

And it's his third time at European Championship tournament ..

Knowing Fatih Terim since 1990's, Fatih Terim is one of the experienced coaches in the tournament!

He has changed a lot since the early days of coaching Turkish National Team.

He is more relax  and calm during the camps...


Someone who followed him in his first National Team camp in Toronto,Canada in 1995, could see him changed a lot since ...

Back then, he was more disciplined with his players in the camp....

He would never allowed his players with transfer deals like he gave permission  to Emre Mor !


Fatih Terim and his assistants could do so much though ......


It's up to the player to play the matches on the pitch.

Turkey is in very difficult group....

The first match against Croatia is very important ....

A win will be huge and a draw wont be bad but  a loss will not be good for Fatih Terim and his boys !

The new kid,(wonder-kid) Emre Mor excite me on this team!

I don't think so, but I know ,Terim will use him ,if things don't go his way !

I think, Emre Mor will energize the Turks on the pitch....

He brings excitement when he goes on the pitch.

Like Fatih Terim said, Emre Mor is special player who will get better...

Looking at the whole team.....

Defense, There we have some problem !

Midfield, good players but they are little slow ...

Selcuk Inan  and Arda Turan should play box to box if  Turkey wants to go further !

As far as the offense, we need to use the sides more and Burak Yilmaz has to be in his "A" game ..

He has to score goals !

If  "A" plan does not work , he will use players like Cenk Tosun, Emre Mor, Yusuf  Malli on his B plan !

So, Terim and his boys are ready for Croatia on Sunday...

It's put up and shut up time on Sunday!