The Istanbul court accepted the retrial of  suspects so called, being member of   a criminal, organization but rejected Aziz Yildirim's demand  that  investigation was a plot against him and others.

Aziz Yildirim served a year in the jail,  and freed on pending appeal in 2012.

The date of new trial is unknown at the moment.

My Interview with Jermaine Jones

Turkish footballer Emre Belozoglu was handed a two-month 15 days suspended jail sentence on Tuesday for a racist slur he used against Ivory Coast midfielder Didier Zokora during a match in 2012.
The court sentenced the Fenerbahce and Turkey national team midfielder on the grounds that the act constituted an insult crime of "religious, racist, ethnic, sexist or sectarian discrimination."
The incident, in which Zokora accused Belozoglu of calling him the "N" word, occurred in April 2012 at a playoff match between Fenerbahce and Trabzonspor.
The sentence was suspended by the court as Belozoglu had not had any previous incidents of a racist nature, the judge said, and on belief that he would not repeat his behaviour.
Belozoglu was accused of racism three times during his three-year career at Newcastle United, but the English FA's investigations failed to prove the accusations.
Belozoglu became the first Turkish footballer ever to have been handed a prison sentence for racism.


Zokora, in Brazil now for the World Cup, had previously played in England for Tottenham Hotspur.

Galatasaray and Mancini came to terms to end their working relationship ....

Mancini took over the job back in September of 2013 when Fatih Terim left the team. 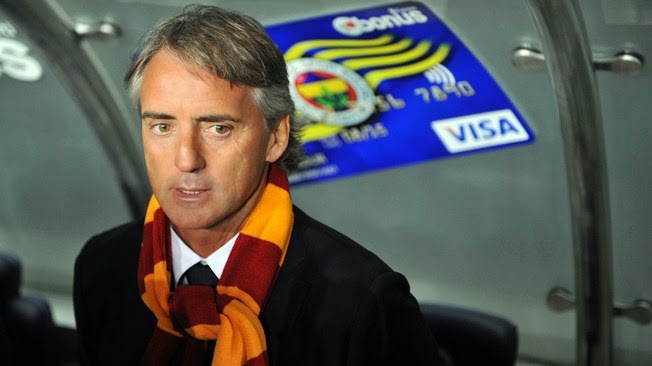 On Galatasaray official website , this is what was published....

"Our relationship with coach Roberto Mancini and his contract of employment, which was signed on October 1, 2013, has been terminated by mutual agreement,"  We wholeheartedly thank (Mancini) for his success and achievements and wish him happiness in his next mission. "

Mancini said, He will miss Istanbul and Galatasaray and explained why he left Galatasaray...


“As a Coach I understand the demands of my club,” Mancini said. “When I accepted the post of Galatasaray Coach the targets were different.

“In these eight months, though I came in during a season that had already been partly damaged, I have done my job with passion and in constant pursuit of victory.

“This was followed by Champions League qualification, the Turkish Cup and second place in the League.

“With regret, I leave Istanbul and the fans, which are both splendid. I give an affectionate goodbye to the President, the team and everyone I have worked with. They worked with talent and loyalty.”

Jermaine Jones will not play for Besiktas next season !

After #USAvTURKEY  match I got a chance to interview  Besiktas's Jermaine Jones and I asked him question about his playing role in both teams and asked him if he was going to play for Besiktas next season.