Bursaspor beat the Netherlands’ Twente 3-1 in its first-leg game of the Europa League.


Twente's Chadli put his team ahead with a goal in the first 30 minutes of the game.

Batalla and Sestak scored goals for Bursapor to give the team a home victory over Twente.

Trabzonspor fans were upset with score after the match.....

The second match will be very interesting for Trabzonspor....

Three goals in 10 minutes saw Spartak Moscow beat Fenerbahce 2-1 at home in a first-leg playoff match, with striker Emmanuel Emenike on target against his former club.

Emenike, who joined Spartak last year after just two months at Fenerbahce, scored on 59 minutes Tuesday, hammering the ball into the net after pouncing on a low left-wing cross from Dmitry Kombarov.

Fenerbahce levelled the score and grabbed an important away goal six minutes later as ex-Liverpool striker Kuyt struck from a narrow angle into the empty net after Saw set him up with a cushioned header in the penalty area.
Spartak restored their lead within four minutes as Kombarov lashed the ball into the net off a corner from ex-Celtic midfielder Aiden McGeady.
"We controlled the game the whole 90 minutes, although we allowed our opponents to convert one of the two dangerous chances they managed to create," Spartak coach Emery said.
"Of course, it is painful that we lost, but the second game is in seven days, so we have to show the result at home, supported by our fans," Fenerbahce midfielder Krosic said.
Spartak started the first half brightly, keeping Fenerbahce's occasional attacking thrusts under control, but missed several good chances.
Former Diniyar Bilyaletdinov could have headed in an opener three minutes after kickoff, but the ball whizzed past the post.
Fenerbahce goalkeeper Mert Gunok saved his team from a bouncing header by Brazilian striker Ari that threatened to loop in under the crossbar as Gunok hurried back to tip it over.
A minute later Ari, attempted another header but this time it was blocked.
On 24 minutes Bilyaletdinov tried to volley the ball into the net from the cross by midfielder Evgeni Makeev, but his powerful kick went wide.
Sow missed Fenerbahce's only clear-cut chance on the first half on 35 minutes as he sent the ball far above the bar from inside the penalty area.
Early in the second half, Fenerbahce the chance to open the scoring, but Spartak goalkeeper Andriy Dikan saved Brazilian midfielder Cristian's header.
Spartak could have extended their lead at 82 minutes, but McGeady scooped the ball over the bar from four yards after connecting with a pass from striker Artem Dzyuba.
Spartak fans celebrated the start of the second half with flares, which led to smoke floating around the stadium for much of the half. Use of pyrotechnics regularly attracts UEFA sanctions in European competition.
The second leg will take place August 29 in Istanbul.

Turkish Super League to kick off on Friday

Defending  champions Galatasaray will begin the season at home against newly promoted Kasimpasa next Monday.

While Trabzonspor will play their first match against Kardemir Karabukspor, Besiktas will try to gain their first points in a derby game against Istanbul Buyuksehir Belediyespor.

Finally ,Fenerbahce Gets Yobo from Everton 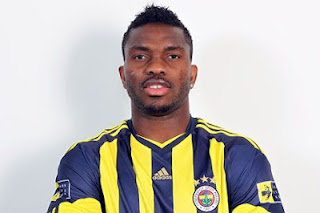 The communication between Yobo's manager and Fenerbahce was none, after  Yobo and Yobos's manager demand  bonus payment for European  matches..


There were no communications until after Vaslui match ,ended with a surprise 1-1, draw at home....


Next morning, Fenerbahce got on the phone and  started  the phone calls...


First, they got Milos Krasic after just yesterday they wrapped  the deal with Arsenal for Yobo...


The 31-year-old defender signed a three-year contract with  Fenerbahce.


After Yobo and agreed to term with Fenerbahce , He wrote this on Twitter..


"I would love to thank Everton and the management of Fenerbahce for reaching a deal eventually,


Here is  my biggest gripe on this two transfer....


Why Aykut Kocaman, coach of Fenerbahce waited so long to sign these two players?


After Vasuli disaster, someone  pushed the button.....


I just hope, Fenerbahce  don't  lose against Vasuli in Romania...


If they do, it will not be good for Aykut Kocaman!