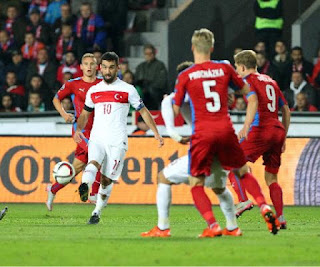 Two second half goals led Turkey to a 2-0 win over the Czech Republic in their Euro qualifier on Saturday to keep alive the away side's chances of making the tournament in France next summer.

The already-qualified Czechs squandered an opportunity to overtake Iceland for top spot in Group A but could not make their early possession pay in a mostly drab game in which neither side generated many scoring chances until late.

Turkey, needing four points from their last two games to clinch a play-off spot, broke through in the 62nd minute after Czech defender Filip Novak conceded a penalty for a foul on Serdar Aziz in the box.

Selcuk Inan converted the spot kick for the Turks, who doubled their lead in the 80th minute when Hakan Calhanoglu beat his marker and slotted home after latching onto Ara Turan's lofted pass into the penalty area.

The Czechs, playing without a number of regular players, including goalkeeper Petr Cech, remain in second place behind Iceland in Group A.

Either Turkey or the Netherlands will finish third after Tuesday's final qualifiers.

Both sides have a game remaining after Saturday’s fixtures — Turkey face Iceland while Netherlands take on the Czechs.
Even a possible draw against Iceland on Tuesday — in the Turkish central province of Konya, where Turkish national team thrashed the Dutch 3-0 last month — will be enough to thrust Turkey into the playoff stage, without regard to the outcome of the Netherlands – the Czech Republic game in Amsterdam.
During Saturday’s match in Prague, Turkish National team players wore black armbands to protest the twin bombings in Turkish capital Ankara that killed 95 people on Saturday. Before the kick-off both team players stood in silence to commemorate the victims.
The blasts targeted a peace rally in Turkey’s capital in the morning, leaving at least 95 dead and 246 injured, according to the prime minister’s office. The number of casualties makes the attack the deadliest in recent Turkish history.
– Group A results:
Czech Republic 0-2 Turkey
Iceland 2-2 Latvia
Kazakhstan 1-2 Netherlands
– Group A standings: 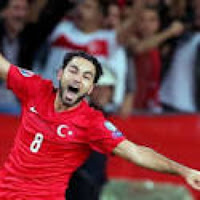 Iceland also progressed from Group A as runners-up to the Czech Republic, who ensured Netherlands were eliminated amid ignominy and a 3-2 defeat in Amsterdam.
Posted by TURKISH FOOTBALL BY AHMET BOB TURGUT No comments: 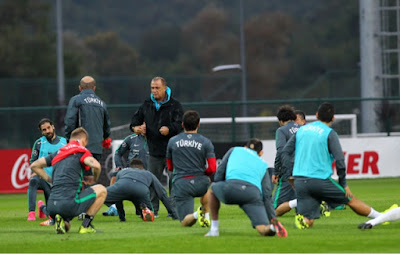 After beating Netherlands in the group ,Fatih Terim's boy got a another chance and captured the third place in the group A !

But, to order to finish third place in the group they have to earn point and points on Saturday against second place Czech team !

Fourth place Netherlands  will travel to Kazakhistan on Saturday....

A loss there, would make things easy for Turkey ....

In group A, Iceland is in first place and Czech team on second place....

They have to show to the world they are crunch time team again.

Next two matches are really important for Turkey and Fatih Terim...

You lose ,you snooze !

That's why this  match on Saturday is very important ....

My only gripe about the team is the defense and Arda Turan's match performance !

His lack of playing time in real match , is the biggest risk ....

Will  we see another miracle comeback win against Czech's ?