Juventus will return to Turkey, the scene of their surprise Champions League exit, after the Europa League last-32 draw pitted the Serie A leaders against Trabzonspor.
Juventus surrendered their place in the knockout stages of Europe's premier competition by losing at Galatasaray last week and dropped into the Europa League, meaning they will host Trabzonspor in Turin on February 20 before heading to the transcontinental nation a week later.

The reigning Italian champions will hope to put the disappointment of a curtailed Champions League campaign behind them by reaching the final which will be held at their Juventus Stadium on May 14.

Galatasaray will face Jose Mourinho and Chelsea in the Round of 16 Champions League if it is to equal its feat of appearing in the tournament's quarterfinals for the second straight year after it was drawn to face the 2012 champions in the knockout round .
Mourinho's Real Madrid eliminated the Lions in the quarterfinals of last year's competition, and the famous Portuguese coach had expressed his desire to draw Galatasaray in the Round of 16 in this year's tournament so that he could again face one of his most famous protégés, Ivorian legend Didier Drogba.
Galatasaray will start the knockout stage at home in late February before traveling in early March for the away leg at Stamford Bridge in London.
The other draws are as follows: Barcelona-Manchester City, Manchester-United-Olympiakos, Atletico Madrid-AC Milan, PSG-Bayer Leverkusen, Real Madrid-Schalke, Borussia Dortmund-Zenit St. Petersburg and Bayern Munich-Arsenal. 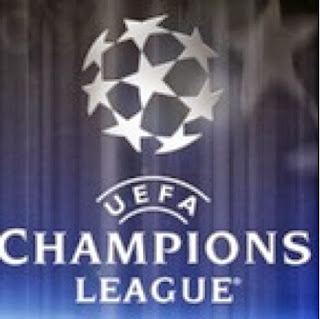 Trabzonspor had a goalless draw against Lazio, finishing the group stage as the leader without any defeat in six matches in UEFA Europa League .

On Thursday ,Trabzonspor played against Lazio in an away  and match ended with 0-0 draw .

Trabzonspor need it only a point and they got what they wished for!

Both teams were already earned to play in the round of 32 draw, Lazio will finish in second place in the group J .

Trabzonspor finished in first place group stage with 16 points in six games, defending their unbeaten title in 14 matches in a row.

Trabzonspor coach Mustafa Resit Akcay said, they are very happy to finish on top of the group in the group J .

First year coach Mustafa Resit Akcay  said they are more focused to Europa league matches then Turkish Super League and they want to go further in the  Europa League ! 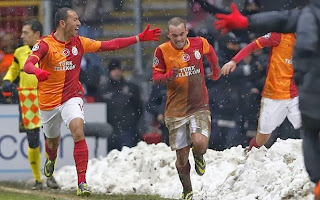 Wesley Sneijder's  killer blow five minutes  to end , send Galatasaray into the round of 16 .....

Wesley Sneijder's late winner in snowy Istanbul sent Galatasaray into the Champions League last 16 and knocked their visitors Juventus out as they completed Tuesday's abandoned tie.


The Dutch midfielder latched onto Didier Drogba's flick to finish low into the net and secure second spot in Group B for Roberto Mancini's side.
The match restarted on 32 minutes.....

Juventus have won their last seven league games without conceding a goal and knew a point would be enough to secure qualification, with Turkish side Galatasaray needing victory.
And, on a pitch that had been cut up by efforts to clear Tuesday night's snow, the Serie A leaders looked to be heading into the knockout stages without too much drama, until Sneijder's late intervention.
The sides' final Group B clash at the Ali Sami Yen Stadium was stopped on Tuesday night with the scoreline 0-0, as increasingly heavy snowfall made playing conditions nearly impossible.
With the snow still falling and the pitch difficult to play on, both sides struggled to create too many clear-cut chances on Wednesday until Sneijder burst on to Drogba's towering flicked header.
Running away from goal, the midfielder sent a low shot across goal, through a defender's legs and into the bottom corner of the net to send the vocal home crowd into wild celebrations.
Juventus have to settle for a place in the Europa League after finishing third in the group.
Posted by TURKISH FOOTBALL BY AHMET BOB TURGUT No comments:

The Champions League match between Galatasaray and Juventus was abandoned due to poor weather on Tuesday with the remaining 59 minutes to be played on Wednesday.
Play was halted in the 31st minute with the score at 0-0 as hail and snow began to fall heavily in Istanbul.
Both teams went back to the dressing room as groundsmen tried to clear the lines.
Half an hour later it was decided to postpone the Group B match after "both captains and the referee agreed that the pitch had become dangerous" according to a statement by European football's governing body UEFA.
UEFA later announced the match will kick off at 3 p.m. local time (1300 GMT) on Wednesday. ( 08:00 am ET )
UEFA had originally said it would restart at 2 p.m. (1200 GMT) but Turkish police sought to have the match put back an hour for safety reasons.

Read more here: http://www.thestate.com/2013/12/10/3151565/galatasaray-vs-juventus-abandoned.html#storylink=cpy
However, further snow is forecast.
Juventus needs a point to qualify for the knockout stage while Galatasaray must win to progress. 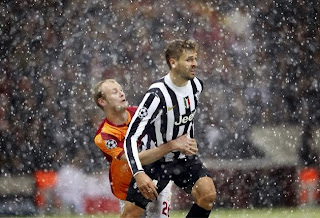 Do or Die Match for Galatasaray !

Win against Juventus on Tuesday will be good enough for Galatasaray to join Real Madrid in the last 16 of the Champions League but coach Roberto Mancini knows it is not going to be easy.

A 4-1 loss at the Santiago Bernabeu a fortnight ago left the Turkish giants third in Group B, two points adrift of second-place Juventus heading into the decider at a sold-out Turk Telekom Arena in Istanbul.

Galatasaray are level on four points with Copenhagen but have a better goal-difference against the Danes, who host already-qualified Real Madrid in the other pool game.

"We have all to play for and we need to be calm and show focus."

"We play at home and in a game, anything can happen.

"We know it's going to be a very difficult match because Juve is a very good side.

"I think if we are fortunate like we were in the first leg (a 2-2 draw in Turin - Mancini's first game in charge of Galatasaray), and we limit mistakes, then we can do well and achieve our aim."

Galatasaray are in fourth place in the Turkish Super League, will be bolstered by the return of former Lazio goalkeeper Fernando Muslera and ex-Inter Milan forward Wesley Sneijder.

Muslera returned to action in Friday's 2-0 triumph against Elazigspor after being sidelined with a fractured toe since October 31.

Sneijder, meanwhile, has been out for a month with a recurring thigh injury but is set to play in support of lone striker Didier Drogba against Juve.

Juve's 3-1 triumph against Copenhagen on November 27 was the Italian champions' first win in the competition this season.

More importantly, it allowed Antonio Conte's men to keep their destiny entirely in their own hands heading into the final group game.

A draw in Turkey will be enough to see the Italians progress to the knockout stages.

"We cannot go there with fear but determined to win," striker Fernando Llorente said.

"If we control the game and if we give all that we have inside, then we can do it.

"Our journey in the competition has not been easy but we have recovered and we are one step away from achieving our aim."

Juve warmed up for the encounter with Friday's 2-0 triumph at Bologna, their seventh straight Serie A victory.

Galatasaray's Drogba and company will have the last word on the pitch with the help of 12th men in the stands !