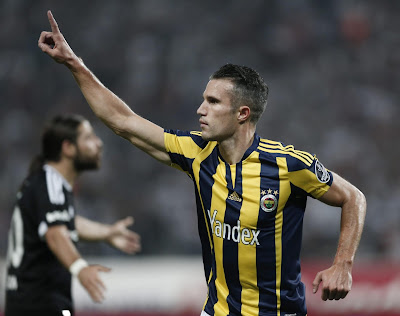 Robin van Persie from being goat to hero !

Yes, until this match , RVP was underfire along with his coach Dick Advocaat from Fenerbahce media and Fenerbahce fans in Turkey .
There were even talks if Fenerbahce were to lose this match in Kadikoy, Advocaat and RVP's days were going to be over !
Well. that did not happaned ....
The hungary side was Fenerbahce and Robin van Persie ...
Galatasaray looked very flat !
Robin van Persie scored twice to give Fenerbahce a famous 2-0 home victory over rivals Galatasaray in the Super League.

Dick Advocaat's side had failed to win in the last three Rivalry matches, but ended that run with a comfortable triumph at the Sukru Saracoglu Stadium.

Van Persie scored just before half-time before sealing the victory with a late penalty as the hosts made it eight Super League games unbeaten.

The win means Fenerbahce leapfrog Galatasaray – who have now lost three of their last four league games – in the table, moving up to third and reducing the gap to leaders Besiktas to six points.

Volkan Demirel made an early save from Galatasaray winger Bruma, while Van Persie – one of five players booked in a feisty opening period – curled a free-kick narrowly over at the other end.
But home fans were delighted in the last minute of the half when Alper Potuk set Sener Ozbayrakli free down the right, with his cut-back allowing Van Persie to divert a right-footed strike past Fernando Muslera and into the top corner.

Souza headed Potuk's corner inches wide as Fener pushed for a second after the break, Gala boss Jan Olde Riekerink sending Lukas Podolski on for Wesley Sneijder in a bid to turn the match in his side's favour
But the visitors suffered a blow when their top league goalscorer Eren Derdiyok had to be taken off on a stretcher after a blow to his head and it was game over with 12 minutes remaining as Fener struck through a controversial penalty.

Serdar Aziz lost possession to Souza in a dangerous area and the midfielder immediately went down under his opponent's challenge in the area, leading to referee Cuneyt Cakir pointing to the spot.
Van Persie stepped up and beat Muslera despite the goalkeeper correctly diving to his left, sending the home crowd wild.

The veteran striker came off to a hero's reception in the closing stages, as Galatasaray failed to register a second-half shot on target.