HIDDINK OUT, AVCI IN , IN TURKEY! 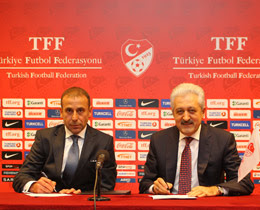 The federation says it has signed an agreement with Avci until May 31, 2015.

The 48-year-old Belediyespor coach formerly managed the Turkey U-17 team, guiding it to fourth place at the world championships in 2004.

Abdullah Avci after the announcement said, "I am very happy to have been given such an honor,"

Turkish Football Federation president Mehmet Ali Aydınlar said: "Mr. Avcı deserves this post as a UEFA European Under-17 Championship winner and FIFA U-17 World Cup semi-finalist and he got it. I believe he'll put his mark on many successes during his working term"

Avcı's coaching career began at İstanbulspor in 1999 before a spell as Galatasaray youth academy chief. He took over Turkey U17 team and in his first season secured victory at the 2005 European finals in Italy and reached the FIFA U-17 World Cup semis in Peru.

In August 2006 he moved to İstanbul BB, leading them to promotion in his first season and keeping them in the Super League ever since. Starting from 2006.