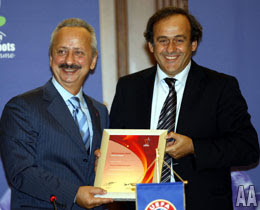 Michel Platini, the President of UEFA and Haluk Ulusoy, the Chairman of Turkish Football Federation (TFF), signed a contract that seals Turkey's membership to Grassroots Charter.The charter, which was created in 2004, represents an endorsement of a national association's grassroots programmes.

UEFA's work is about around encouraging and supporting the associations in reinforcing their grassroots activities.
Signing the charter means that a national association satisfies certain basic minimum criteria.

Associations enter with basic one-star status, and additional stars are given in relation to specific grassroots areas - these include the nurturing of women's and girls' football, social programmes, including disability football, number of participants, and the promotion of grassroots football.

Up to seven stars are possible. "Our aim is to reach the highest level in the charter. Our federation qualifies children and teenagers as a potential for the future of Turkish football, and therefore we attach great importance to them. We plan to make best use of this potential," said Haluk Ulusoy after the signature ceremony held at Istanbul's Ciragan Palace. "We also support wheel-chair organizations," he added.
"Turkey has become the 21st country signing the Grassroots Charter," stated UEFA General Secretary David Taylor who also attended the ceremony.

According to a press release issued by UEFA at Çırağan shortly after the meeting, the draw for the 2008 European Championship finals will take place in the Swiss city of Lucerne on Dec. 2, 2007. Host nations Switzerland and Austria will be competing in groups A and B while the remaining 14 teams will be divided into four categories. If Greece, the current European champion, makes it to the finals, it will be competing in the first category with the team that has the highest points. The remaining 12 teams will be divided into three categories on the basis of their average points from the 2006 World Cup and the qualifying round for the Euro 2008.

Meanwhile at his press conference, Platini repeated the policy of zero tolerance toward violence and racism in soccer stadiums and also toward those who engage in such practices. "We can take strong decisions -- if we have to exclude supporters from stadiums or suspend clubs, we will, until the day that we have people in the stadiums who come to watch soccer, not to cause problems."

Platini also said he would applaud any referee who, in agreement with the match delegate, decides to stop a game because of racist conduct in stadiums. "Some things are fundamental in life," he explained. "A soccer match is important but there are certain behaviors we cannot tolerate at stadiums."

At its meeting on Wednesday and Thursday, the Executive Committee heard a report on the club licensing scheme after four years of implementation. It stressed the necessity of continuing the excellent work that has been done since the scheme was introduced at the start of the 2004-05 season.

In the meantime, Platini, replying to questions from the press, explained his popularity in Turkey by recalling that he did not score a single goal against Turkey during his years as a footballer. Platini also said Turkish soccer has come a long way in the past 20 years. “You finished third in the 2002 World Cup and Galatasaray won the UEFA Cup and European Super Cup in 2000. There were great players at that time. This is a problem of generations. The players get old and a new generation has to emerge.
Posted by TURKISH FOOTBALL BY AHMET BOB TURGUT