World Cup Hopes Pretty Much Over for Turkey ! 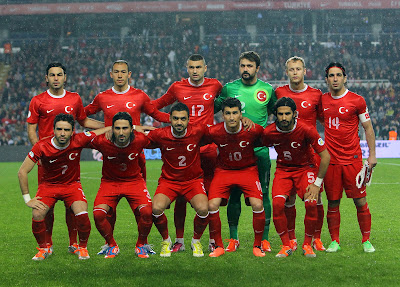 It was to be or not to be in this group for Turkish National team and coach  Abdullah Avci and they could not do it in front of their home turf at Fenerbahce's Sukru Saracoglu stadium.

Although, Turkey went ahead with Burak Yilmaz header first a huge mistake by defender Semih Kaya cost Turkey  a win !


Turkey's goal came from Burak Yılmaz on 63rd minute while, Bode equalized the score for Hungary on 71st minute.


Hungary had the first chance in the sixth minute, but Adam Szalai hit his shot straight at Turkey goalkeeper Onur Kivrak. Turkey forced a succession of corners and then Alper Potuk shot wide for the home side, who lost the reverse fixture in October 3-1.

With nearly 20 minutes gone Szalai tried another shot from distance, which was again off target, as was Alper Potuk when he shot from long range. But just three minutes later Hungary twice went close to taking the lead, only to be denied by Onur Kivrak.

Balazs Dzsudzsak's free-kick was headed by Szalai but the effort was parried by Onur  Kivrak, who also saved Tamas Kadar's follow-up shot. Nuri Sahin shot over the bar and then Selcuk Inan  saw his effort blocked by  defender Jozsef Varga.

Hungary keeper  parried a shot from Arda Turan before  Burak Yilmaz shot wide. Turkey should have taken the lead, but  Alper Potuk missed the target with a shot from close range and then Kiraly tipped over a 25-yard shot from Nuri Sahin
.
Burak Yilmaz shot over the bar and Hungary's Tamas Hajnal fired wide as both sides started the second half well.  Burak Yilmaz finally made the breakthrough on the hour when he headed in Arda Turan's cross from close range.
Hungary  were level with 20 minutes to go when substitute Bode shot home from close range. The visitors nearly took the lead when Vladimir Koman's shot was blocked, but neither side could break the deadlock in a frenetic finish.

In the other matches , Netherlands beat Romania 4-0 while, Estonia defeated Andorra 2-0.

Abdullah Avci did  not serve what he promised , when he took over from Guss Hiddink !

He spoke way too early, in my opinion !
Posted by TURKISH FOOTBALL BY AHMET BOB TURGUT 1 comment: 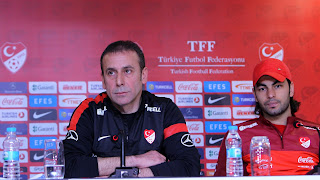 It is to be or not to be for Turkish National team and coach Abdullah Avci on Tuesday!

After losing two very important matches against Hungary and Romania back last October , every match is final for Avci  and Turkish National team  now...

After winning  in away match against amateur looking team Andorra with only 2 goals, Turkish National team did not look good on the pitch!

Where everyone was expecting them to score like 5 , 8 goals , they took very few shot on a goal keeper that was awful !

On Tuesday, against Hungary , Young Turks has to be Hungary for Hungary....

That is , if they win pretty much every match , including  the Tuesday night match....

Who ever plays in goal has to have flawless ,match...

Midfield diamond  is very important too

Hamit , Arda and Selcuk for sure will be on the pitch.....

That  triangle is very important for Turkey.....

Burak Yilmaz and  Umut Bulut  will probably play on  top against Hungary ..

A win, will bring Turkish National team  within one point with  Hungary....

That is why, this match is crunch and clutch match for  Turkey and Abdullah Avci !

They could prove  this with winning every match in the group....

Turkish National  team  struck two first-half goals to beat bottom side Andorra 2-0 in a World Cup Group D qualifier on Friday although an unimpressive performance did little to boost confidence about their prospects of reaching the finals.
Turkish National team went ahead on the half-hour with a free kick by Selcuk Inan from the edge of the area that flew into the far corner of Josep Gomes net after Burak Yilmaz was fouled.
Burak Yilmaz doubled Turkey's lead just before the break with a cross-shot from a narrow angle after being put in by Umut Bulut though they failed to capitalise on any more chances.
Turkey, who are struggling in fourth place in the six-team group with six points from five matches, host Hungary on Tuesday having lost the away fixture 3-1 in October.

Source :Reuters and edited by this blogger
Posted by TURKISH FOOTBALL BY AHMET BOB TURGUT No comments:

Mourinho v Drogba. Sneijder and Altintop back to face their former teams. The two top scorers in the competition come face to face. Without a doubt, Real Madrid v Galatasaray is
one of the most exciting Champions League Quarter-Final ties.
Nobody can question the quality Real Madrid, with one of the strongest squads in Europe and looking for their record 10th Champions League triumph makes them the favourites for this tie. But their opponents, Galatasaray, pose a massive threat and are certainly no push-overs.
The key factor for Galatasaray being within a chance of progressing is the 2nd leg being held in İstanbul. The atmosphere at the Türk Telekom Arena on that night will be electric, louder than any other of the ties, especially if Galatasaray are in with a chance. Galatasaray must keep it tight in the first leg in Madrid, with the aim to take a decent result back home. I think Galatasaray will have to score an away goal or two, which they’re well capable of. Any more is a massive bonus
Burak Yılmaz has scored 8 out of Galatasaray’s 11 Champions League goals so far, but they’re by no means a one-man-team. New marquee signings Didier Drogba and Wesley Sneijder have yet to fully make their mark on Turkish football, but I have no doubt that in time they will. Both aren’t fully fit at the moment and Fatih Terim is yet to find a position to suit Sneijder without affecting the balance of the Galatasaray team. He has time now to find out before the Real Madrid tie, he’s a fantastic coach and I’m sure he will. Drogba and Sneijder should be fully fit and fresh for the games against Real Madrid and their Champions League experience will be a massive lift to the team.
They have a fantastic young goalkeeper in Fernando Muslera, his great display against Schalke in the 2nd leg was a massive factor in Galatasaray progressing. Without him, they would most likely be out and Schalke would be playing against Real Madrid. The midfield is strong with Felipe Melo doing the hard work and set piece specialist Selçuk İnan pulling the strings and making those killer through balls into the strike force of Burak and Drogba. We all know the quality that Wesley Sneijder posesses and if he’s on top of his game then Galatasaray should give Real Madrid a real game. Out wide, Hamit Altintop and Nordin Amrabat and good but nothing great. They will have to track back a lot as Madrid pose world class wingers in Ronaldo and Di Maria.
The weakness in the Galatasaray team is the defence. Eboue, Semih, Dany and Riera will be the likely back 4, and are very prone to mistakes. Melo, Selçuk and the wide men will have to help out the defence big time as Real Madrid pose a huge attacking threat.
At the end of the day, it’s about the team who scores the most goals. When Galatasaray get into their attacking stride they’ll be very hard to stop. They just have to find that balance between attack and defence. One thing is for sure, the fans will be right behind Galatasaray. From the minute the Real Madrid players and staff arrive in the airport in İstanbul to the minute they leave, the intimidating Galatasaray faithful won’t give them any peace.
Posted by TURKISH FOOTBALL BY AHMET BOB TURGUT No comments:

Email ThisBlogThis!Share to TwitterShare to FacebookShare to Pinterest
Labels: Why Real Madrid should be very wary about the threat of GalatasarayReal Madrid vs Galatasaray Fatih Terim vs Mourinho Champions League Chris O'Donnell Turkish soccer

Fenerbahce will face Lazio fron Italy....
Lazio and Fenerbahce, who have both been in trouble with UEFA over fan behaviour, were paired in another tie while Tottenham Hotspur, the only one of the quarter-finalists to have won the trophy, face FC Basel with the first leg in London.

Fenerbahce, at home in the first leg against Lazio,   had to stage their last 16 second leg against Viktoria Plzen on Thursday behind closed doors after their fans set off fireworks during a previous home match against BATE Borisov.
Serie A side Lazio will play the second leg in an empty stadium in Rome as they complete a two-match sanction for racist behaviour Of fans, poor organisation and firework-throwing during the group stage match against Borussia Moenchengladbach.
It was Lazio's fourth racism offence this season.
The first legs will be played on April 4 and the second legs on April 11.

Real Madrid, who beat Manchester United to advance to the last eight, will face  Galatasaray.

The match will see Jose Mourinho, the manager of the nine-times champions,

come up against former players Didier Drogba and Wesley Sneijder,

who he coached at Chelsea and Inter Milan respectively.

Two friends Mourinho and Terim will face each other at the quarter-finals.

It is very difficult draw for Galatasaray but, Fatih Terim likes diffucult matches .

First leg match will be in  Madrid, Spain.

A cautious Fenerbahce coach, Aykut Kocaman, told a press conference that his team would still have to work hard to win the second leg match in Istanbul, after defeating 1-0   Viktoria Plzen in the first leg of the Europa League round of 16 tie.

At the press conference Ayku Kocaman said you can't win matches without playing, even though we have the away goal advantage "

Question from Czech journalist , "Are you afraid of tomorrow's match"


Was answered by Aykut Kocaman with a bit a smile on his face " Yes , to tell you truth, Yes I do feel a bit of afraid "


In the beginning of his press conference, Aykut Kocaman congratulate Galatasaray team.

He said , "Galatasaray did the hard thing and went through"


Fenerbahce will be without their fans in the stands...


UEFA has rejected Fenerbahce's appeal against playing in an empty stadium on Thursday because fans delayed an earlier closed-door match by parachuting in fireworks.

The 12th man not being there , will hurt Fenerbahce  financially  and not having the fan support in the stands too!

*Fenerbahçe have won two of their last three European home games without conceding, but are far from invulnerable in Istanbul, having lost the other match in that run 3-0 to VfL Borussia Mönchengladbach.

*Fenerbahçe have reached the quarter-finals of the UEFA Champions League (2007/08) and UEFA Cup Winners' Cup (1963/64) but are making their debut in the last 16 of this competition.


Fenerbahce with one foot in , they could well qualified  to next round  if they play as a team..

Players like Dirk Kuyt  could help with his experience.....