Besiktas blew the win in the last ten minutes of the match! 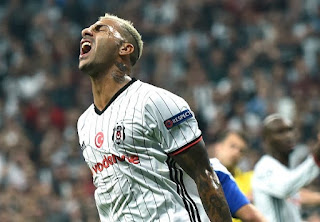 Besiktas almost beat Napoli in Istanbul but right after Quaresma's penalty kick goal , they did not hold as a team and after very bad throwing by Besiktas and defensive big error ,Napoli scored in the 82th minute!

Managing the last minutes , has been a big problem for Besiktas ...

Giving away the win In Istabul last night,just might come back to bite them...

The had a chance to capture the first place in the group and they let it go out of their hand !

Napoli is on top of the group B with 7 points and Benfica moved to second place with same points .

Besiktas is third with 6 points and Kiev is only with one point !

That's what Besiktas need it to win this match last night ,they blew it ....

One point good but, now Besiktas has to win their next matches .

A brilliant late goal from Napoli captain Marek Hamsik secured a 1-1 draw at Besiktas to keep the Italians a point ahead of their opponents in Champions League Group B.
Besiktas went ahead with just 11 minutes left through a penalty from Ricardo Quaresma.
However, Hamsik hauled the visitors level on 82 minutes when he cracked a 20-yard effort into the top corner.

Napoli head coach Maurizio Sarri was out to make amends for the 3-2 home defeat by Besiktas two weeks ago, which had prompted skipper Hamsik to issue an apology.
Sarri made three changes, bringing in Manolo Gabbiadini, Nikola Maksimovic and Jorginho as the visitors looked to put a reshuffled Black Eagles defence under pressure.
Besiktas were looking to recover from a poor run that had seen them suffer four defeats in their last six matches in all competitions.


the Italians as Faouzi Ghoulam and Lorenzo Insigne combined to put Gabbiadini through, but he shot straight at Besiktas goalkeeper Agosto Fabri.
Besiktas then saw an effort from Vincent Aboubakar ruled out for a foul in the buildup.
Gabbiadini was in behind the home defence again on 11 minutes, with Fabri this time saving with his legs.
Cameroon front man Aboubakar remained a threat for Besiktas as he sent a cross from Tolgay Arslan wide.
Home coach Senol Gunes had to make a change midway through the first half when defender Dusko Tosic hobbled off and was replaced by winger Cenk Tosun.
Atiba Hutchinson came close for the home side when he latched on to a clearance from Kalidou Koulibaly and sent a curling shot against the outside of a post.
Napoli started the second half brightly and on 56 minutes Jose Maria Callejon fired just wide after collecting a through ball from Insigne.
On 79 minutes Besiktas took the lead from the penalty spot after English referee Mark Clattenburg ruled Maksimovic had handled a cross from Aboubakar.
Quaresma converted, with Napoli keeper Pepe Reina only able to push the ball inside the right-hand post.
The home supporters' joy was short-lived, however, as Slovakian playmaker Hamsik netted a superb equaliser.
Dries Mertens set him up with a cushioned header outside the penalty area and he dispatched a wonderful curling effort into the top corner.
Mertens and Insigne both tried their luck from distance during the closing stages, but Besiktas held on for a deserved share of the points, leaving both teams with all to play for in the last two matches of the group stage.
***********