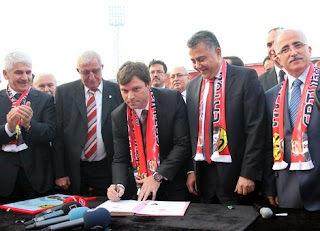 After leaving ,Bursaspor early this year, he was waiting for offers from other teams.

He won the Turkish Super League Championship with Bursaspor in the 2010-2011 season,

43 years old coach, former soccer player from Samsun and he played for Besiktas many years.

He also was goal scorer for the Turkish National team  before Hakan Sukur,

He  coached  Samsunspor and Kayserispor too.

On Friday, Eskisehirspor hold a signing day at the Eskisehir stadium for their coach Ertugrul Saglam.

With fans  and Eskiseher band in the stands, Ertugrul Saglam and team official inked the deal in front of their fans.

Ertugrul Saglam said, he is very happy to come to Eskisehir and  he said ,he will try hard to do same-thing he did in Bursa, taken Bursaspor to league title.
Posted by TURKISH FOOTBALL BY AHMET BOB TURGUT