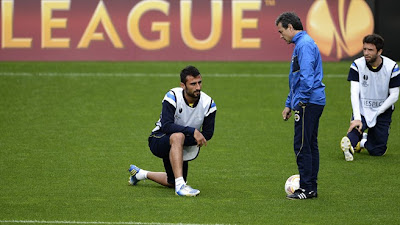 It is huge and historic match for Fenerbahce on Thursday in Lisbon !

A win or draw will take them to UEFA's Europa League final in Amsterdam....

It is a huge match for both teams....

But, Fenerbahce winning the first match gives a little edge to Fenerbahce

On the other hand, Benfica is unbeaten in their 13 home matches!

Fenerbahce, yet to lose in the last 6 away matches in this tournament...

At the end of the match on Thursday, something is going to give in !

Will that be Fenerbahce or Benfica?

Ninety minutes on Thursday will show us this!

Fenerbahce's coach Aykut Kocaman and his players calm and waiting for the kick of on Thursday.

If Fenerbahce comes out clean from Thursday match,they will reach the European Final  for the first time and
they will set a UEFA Europa League record with seven away matches win. 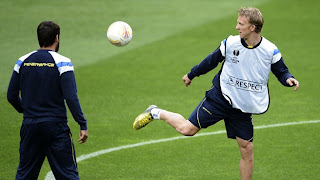 Aykut Kocaman : "One of the most important in our history .Benfica are a more experienced side and have played many European matches. Even with us being 1-0 up in the tie, the chances are equal for both teams.

"We're facing very strong opponents, we have a one-goal advantage but we're not through yet – we'll only know that after 90 or 120 minutes,"
"In the last training session we worked on penalties, but it's more important to be mentally ready to take them. We didn't play well in the first game, but we played the way we were able to. Benfica are stronger here and have the home support with them, while we have the result on our side. For me we're even."

JORGE JESUS : "Our goal is to turn this tie around – 1-0 is a tricky result, but we know and have the confidence that we can go through. We have European experience in both the Champions and the Europa Leagues and we know what it's like to be at this stage. We are calm and won't change anything. We are very confident and hope our fans can help us to reach the final – that's what we all want.
"It's not the most important match of my career, or Benfica's. It's good to be in a semi-final and it's important for the club's image, but a final is even better. We're just one game away and the first-leg result allows us to believe that it's possible to make it real. I'm not nervous because I'm an experienced person and we all know how is to be here. I feel normal and hope my players are the same. It's a sign of both confidence and that we are ready to achieve our goal."

Fenerbahce ended Benfica's 38-match unbeaten run in all competitions, in Istanbul, On Thursday, if Fenerbahce defeats Benfica , they will ruined their 13 -match home win record too!'

Fenerbahce has to do it without  midfielder Mehmet Topal and striker Pierre Webo, who are both suspended, while midfielder Raul Meireles is injured.
The match will be on Fox soccer 2go  and the match will start at 2.55 ET