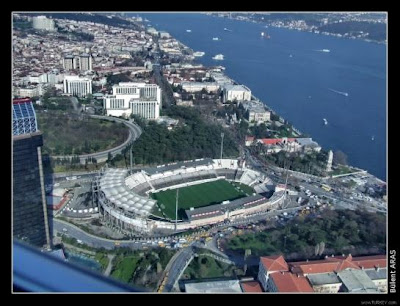 66 years of adventure at Besiktas's  Inonu stadium ends on Saturday night with  a last home match this season for Besiktas.

Not only  for Besiktas fans, also , Fenerbahce and Galatasaray fans too....

Adventure started back in 1947,  when Besiktas host first ever match against Stockholm of Sweden team.

The stadium was inaugurated on May 19, 1947 by  second President of Turkey, Ismet Inonu  who was a die-hard fan of Besiktas.

A lot of history happened there at Inonu stadium...

Galatasaray, Fenerbahce and Besiktas shared  the stadium for long time.....

Galatasaray's Metin Oktay scored the goal would go in to the world records, by ripping the goal nets with his goal.

Back in 1972, I never forget , my late dad who was Besiktas fan took me there for Besiktas match when I was young boy.

The Inonu stadium was iconic for Turkish soccer!

On Saturday night, Besiktas fans and Turkish soccer fans will watch their last match there...

The tickets for Saturday night match against Genclerbirligi sold out within a couple hours.

There was huge demand for tickets......

The Inonu stadium will be demolished and rebuild at same location.

The new stadium will be 40.000 seat stadium and the construction will finish in late 2014.

After Fenerbahce and Galatasaray, Besiktas soccer club will have a brand new stadium in Istanbul.

Until, 2014, it is uncertain where Besiktas soccer team will play their games in Istabul.

On Saturday, there will be a lot of sad faces in the stadium at the end of the match.

A lot of memories will come in front of our eyes , as we say good bye to Inonu stadium,

The new stadium project will start in June of this year.

A win, and who ever scores the last goal in the Inonu stadium ,will be remembered for long time.

Just like , first goal scorer , great Suleyman Seba , Besiktas's player who became president of the club later on and who is honorary president now.

A win for Besiktas , will even up points with Fenerbahce ,before Sunday derby match between Fenerbahce and Galatasaray!