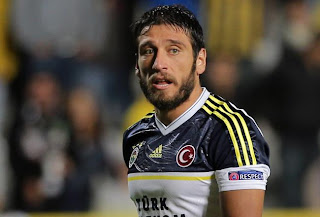 
Lets face it, we saw a Fenerbahce team we have not seen in the Turkish Super League matches,tonight.

As a whole team , they played their hearts out and before the Egemen Korkmaz's goal they hit the woodwork three times including missing the penalty kick by Baroni hitting the post!

But, they never lost the team composure and started the second half of the match with same tone.

Fenerbahce keeper Volkan Demirel made some key saves in the first half.....

After the match, Dirk Kuyt  thanked  Fenerbahce coach Aykut Kocaman, for preparing the team for Benfica clash... he said " our coach told us everything about Benfica and how to play against them  and  that is exactly what we did on the field tonight "

"That is why I like to thank Aykut Kocaman ", he said.

Kuyt went on to say , "This is great night for Turkish soccer "


Even though 1-0 win is a narrow win, Fenerbahce showed, they could bring down Benfica.

The way Fenerbahce played tonight, they really want to play in the final match.

Exprience player like Dirk Kuyt ,could take Fenerbahce to Amsterdam to the finals.

Aykut Kocaman's game plan and regrouping the players is huge for this match.

After the match, Fenerbahce coach Aykut Kocaman  thanked all of his players and said, they played great tonight.

On defense, Gokhan Gonul, Joseph Yoba from Nigaria and Egemen Korkmaz  was excellent .


On bad thing about Fenerbahce is, they will be missing a few players for second leg match in Benfica.

Webo and  Mehmet Topal will be missed because of  2 yellow card suspensions..

Also injured Meireles will not play due to injury in the second leg match.

At the end,starting with Kocaman,all of the players believed in beating Benfica and they did it.

They did it with Aykut Kocaman's good planing and regrouping his players...

It is not all done yet , but Fenerbahce and Fenerbahce fans could enjoy this huge win tonight.