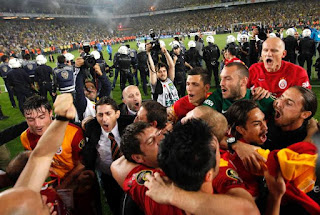 after a 0-0 draw in Kadikoy against Fenerbahce.....

Fenerbahce fans clashed with police after end of the match......

Fenerbahce needed to win to retain the championship,


Some parents angrily reacted to the police after their children were affected, the state-run Anadolu Agency said.
The pitch invasion and violence at Sukru Saracoglu Stadium blocked Galatasaray from immediately celebrating its 18th league title and lifting the Turkish Super League Cup.


Authorities finally turned off the floodlights.