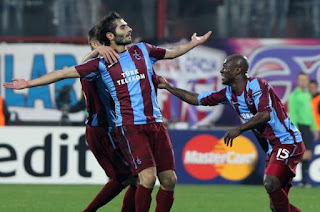 Trabzonspor's Halil Altintop (L) celebrates with his team mates after scoring a goal against Inter Milan during their Champions League Group B. soccer match at Huseyin Avni Aker stadium in Trabzon,Turkey.

This has to be the one of the best match, Trabzonspor played at home in front of home crowd in the Champions League.

Even though Inter Milan scored first with Alverez, Trabzonspor came right back with Altintop(Goldenball)That is Halil Altintop brother of Hamit Altintop from Real Madrid!

Trabzonspor kept the presure in the second half and at one point wood works saved the day for Inter Milan....

Trabzonspor in second place ahead of final matches....

After the match ,Halil Altintop told STAR TV,"It wasn't important how the goal was scored or who scored it. It was important for Trabzonspor, that's why we are all very happy"

"We are satisfied with one point. I believe if we continue to work the way we did we will also get to the second round "

"Despite this being our first championship we are really playing a good championship season. I hope we will be in the Champions League in future seasons and we can gain more experience and I am sure we will be able to play better matches,"

"If we continue on this road I think we will get a good result at Lille and we will be the side that is smiling."


Trabzonspor have six points with their two rivals for second place on five going into next month's fixtures when the Turks visit French champions Lille while CSKA travel to Inter.

Inter Milan, already through to the Champions League, thanks to a 1-1 draw at Trabzon!

Inter Milan was lucky to get a draw in Trabzon!