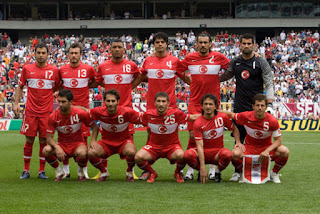 This has to be the one of the top matches on Friday, in the Euro2012 Qualifications!

Germany already quantified and they are on top of the group A, with perfect record...

Germany will be looking to maintain its perfect record in the last two matches.

On the other hand Turkey, who is on second place in the group and has to get at least a draw against Germany and win against Azerbaijan on Tuesday in the last match...

Germany will play their last match in the group against Belgium the team who is breading on Turkey's neck!

.
Turkish National team is with 14 points and Belgium with 12 points..

Both team plays against Germany!

While Turkey playing Germany on Friday ,Belgium will be home against Kazakhstan on Friday...

A win against Germany will keep Turkey's hopes alive to their last group game with Azerbaijan next Tuesday.


Turkey's goal is to finish the group stage at the second place and make a headway to the play-offs.


I believe they could do it if they play as a team ninety minutes....

On the other hand, Germany most likely will use their young players on Friday....

What is so interesting , both teams will have German born player playing for their National team..

Could they do it, it will be difficult but not impossible!

Turkey vs Germany match will start at 2;30,PM,ET on Friday

and will be only on Foxsoccer.tv in the United States and in Turkey match will be broadcast by NTV.