Turkey Finishes Second and Qualify for the Play-Offs 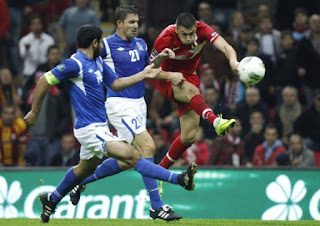 It did not come easy but they did it hard and stresfull way with boring football!

Turkish National team was having tough time playing against Azebejian in the first half...

At the first half brake they went in to the loccker rooms and re group and found out a good news that Germany was beating Belgium 2-o at the half!

That gave the Turkish players a little releif and they came out and played little better football in the second half...

After, Selcuk Inan came in to the match, Turkey loked in attacking mode!


And Burak Yilmaz struck a goal after 59 minutes,firing from Selcuk Inan's pass.

With Belgium losing 3-1 to Germany, Turkey did enough - just enough !

Turkey snatched second place and a place in the Euro 2012 qualifying play-offs.

Watch the highlights of the Turkey vs Azerbaijan match from NTV here..

Email ThisBlogThis!Share to TwitterShare to FacebookShare to Pinterest
Labels: Turkey Finishes Second and Qualify for the Play-Off Euro 2012 play offs