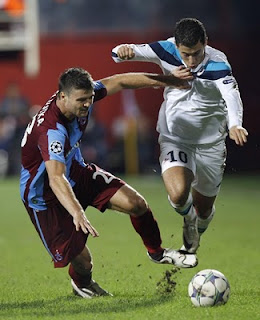 Moussa Sow had given French champions Lille, a 31st-minute lead, but Colman's 75th-minute spot-kick ensured parity and a 1-1 result.


This was the first ever Champions League match played in the city of Trabzon,Turkey!

Lille looked was better side and were scorers before the first half.

After Eden Hazard had tried his luck in the 29th minute, they took the lead with their first shot on goal. David Rozehnal's ball was not cut out by Marek Cech and Sow was able to net from a tight angle, through the legs of goalkeeper Tolga Zengin.


It was nearly 2-0 four minutes later when Hazard squared for Sow - but the Senegalese international was unable to make contact, to the relief of the home side.

The first half finished on a sad note when Marek Cech was carried off on a stretcher following a reckless challenge by Lille midfielder Joe Cole, who was booked for his efforts. Marek Cech returned for the second half and Trabzonspor who threatened first with Serkan Balci shooting high and wide twice in as many minutes.

Soon after Sow came close to a second goal for the visitors, out-muscling defender Giray Kacar but shooting just wide of the far post.

An open start to the second half continued when Colman saw a shot from the edge of the penalty area saved low down by Mickael Landreau. At the other end, Cole should have done better than fire at Zengin when unmarked seven yards from goal in the 54th minute.

Adrian saw a left-foot shot deflected wide in the 71st for a corner which came to nothing, as the hosts sought an equaliser. And they got it in the 75th minute, after Mathieu Debuchy handled Paulo Henrique's cross inside the penalty area. Landreau got a hand to the resulting penalty kick and Trabzonspor scored the penalty kick and had their point. 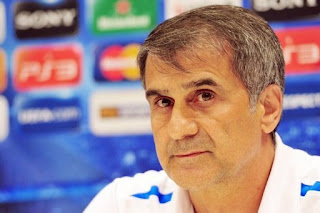 
After the match, Trabzonspor coach Senol Gunes could not say whether he was "happy or upset" after his side clinched a 1-1 draw against Lille to move to the top of Group B.

He went on to say, "Despite the poor pitch conditions, we pressed them up front and chased for an equaliser. The result is not that bad and I congratulated my players.

One drawback for us was the lack of creativity. We are top of the group now and we have two consecutive matches against CSKA Moskva. Four points from those two games would give us a very big advantage as Inter are playing against Lille."