TRABZONSPOR BACK ON TOP IN TURKEY 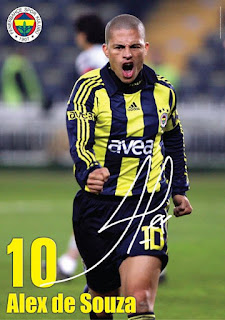 Trabzonspor reclaim the top spot from Fenerbahce after away win against Manisaspor.

When the 21th weekend end it, last week, Trabzonspor was the top team in the Turkish Spor Toto Super League, but after Fenerbahce winning the derby match against Besiktas, with a huge score, they captured the first place for at least until Monday night.

On Friday,the third place Bursaspor, had a shot,but they got killed by tough team Gaziantep at home!

Thing are not going well in the Bursaspor team!

The most important match of the week, was the derby match, between Besiktas and Fenerbahce.

Perhaps best team in the second half of the season in Turkey ,Fenerbahce who won their last five matches in the league, started the match strong and scored early goal by Necip Uysal's own goal in the fith minute.

He was little late coming out on the first goal....

This was Rustu's first match in the goal for long time ever since he was injured..

Another huge factor in the Fenerbahce's goal Fenerbahce defender Lugano, was guilty of offensive faul but Referee Cuneyt Cakir did not called it....

He actualy ,was late pulling cards in the first half of the match and that cost Besiktas maybe the match!


Here is why, in the first half, Fenerbahce defender Lugano clearly had two incedents, that he should have received, two yellow cards.

Turkey's FIFA referee, Cuneyt Cakir, did not pulled the cards, in the first half and in the second half, things got out of his hands!

In the last fifteen minutes of the first half Besiktas was better team...

Fenerbahce made a huge mistake by settling back and also was unlucky...

In the 43th minute, Ekrem Dag scored and even the score and half finished with that score.

Besiktas started the second half, strong again and found the second goal in the 49th minute by Ibrahim Toraman's, surprise goal....

Besiktas was taking free kick just out side of the box, and the ball was deflected by Fenerbahce defender and went to wide open Ibrahim Toraman's foot!

Things were going good for Besiktas .....

But things turned upside down, for Besiktas after the 60th minute....

Matteo Ferrari saw a red card after tangling with Lugano in the box and referee Cuneyt Cakir awarded penalty kick to Fenerbahce!

Lugana started first, but retalition was from Matteo Ferrari, so, referee saw that and gave him the red card!

Just before that, in Fenerbahce's attack ,Matteo Ferrari, wrestled Lugano and brought him down in the box, Cuneyt Cakir, did not call anything for that!

I think, this was make up time for that ,in my opinion...

These two players were doing this all game long,but Cuney Cakir, just didnt see it until that penalty kick...

So, That cost Besiktas the match but, great Fenerbahce Captain Alex De Souza came in the scene and scored three unanswered goals and beat Besktas in their nest with huge 2-4 score.

Alex De Souza,was the star of this match, along with Fenerbahce keeper Volkan Demirel...

If Volkan Demirel would not save the one one goal from Almadia it would have been 3-1,,,

That was huge save of the day, in my opinion...

Although Rustu saved a lot of goals but I think ,at that tine when the score was 2-1 Besiktas

winning, Volkan Demirel made a huge save.....

As far as Alex he was just smooth and smart.....

He won this match along with Volkan Demirel in my opinion....

I just hoped , a referee like Cuney Cakir, should have been more focused on the field to players!

He made a huge impact on this match both ways.....

He was kind of lost on the field on Sunday....


Besiktas had their expensive stars but Fenerbahce was better team at the finish....

As I been saying Fenerbahce is the best team in the last six weeks in Turkey,,,,,

As far as Besiktas, they are way off, the title race and way behind Fenerbahce and Trabzonspor!

Their only hope is the Turkish Cup this season...

Trabzonspor beat the team that beat them in the first half, with a late goal by Alanzinho!

Manisapor was the only team that beat Trabzonspor ,in the first half of the season...

But, this time, Trabzonspor beat them in Manisa with the score of 1-2 ..

Trabzonspor first goal was scored by Umut Bulut who scored his 99th goal in the Turkish League!

Manisaspor took the lead very early in the match with Jimmy Dixon's goal in the 14th minute.

With this win, Trabzonspor still the top team in Turkey with 50 pints while Fenerbahce at second place with 48 points and Bursaspor on third with 45 points....

Bursaspor after going down at home to Gazinatepspor, fell behind Fenerbahce and Trabzonspor!

The teams like Kayserispor and Gaziantepspor, are the teams will make a push to the top in the coming weeks.

There is 12 more weeks to play in this league,that is wht the race on the top and the bottom will be hotter than hell in the Turkish Super League.

In the 23th weekend , perhaps most important match will take place in Trabzon when Trabzonspor will host Kayserispor on Sunday while Bursaspor travel to Buca.Izmir on Friday to play Bucaspor and Fenerbahce will have an easy match against bottom team Kasimpasa on Saturday.

Than again, you will never know what will happen in that match!