COULD TURKEY GET EURO 2016 TOURNAMENT? 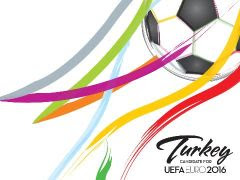 Turkey's bid offered UEFA had a unique chance to "build a bridge between Europe and the mystic Orient". The bid said hosting the Euro 2016 finals would greatly contribute to the growth of football thanks to completely modernised sports infrastructure, long-term legacy benefits that were acknowledged in the UEFA report.

TFF: "We are ready for the final presentation"

EURO 2016 Project Director Orhan Gorbon, answered the questions of AA reporter at the TFF headquarters in İstinye. While indicating that the presentation that will be delivered prior to the UEFA Executive Committee's meeting on Friday May 28th will be very important he said "We will be the first bidder to deliver our final presentation that will take 30 minutes. In this half hour we will try to get together everything we have been telling to this day and it will be a great opportunity to tell all to everyone one last time."

He also pointed out that EURO 2016 would be the perfect opportunity to advertise Turkey. Gorbon said "For example in 2014 the Ministry of Tourism will start a campaign all around the world, situated in the airports with the theme "We are looking forward to see you in Turkey in 2016" Advertising by the money you pay is one thing but having a theme as this one is another thing. Both will come together to change the image of Turkey."

Orhan Gorbon said "5 million tourists are expected to visit Turkey for the tournament. They will be around for the whole month and all the hotels will be fully booked. New stadiums, new facilities will be built. This is very important for the construction, transportation and telecommunication sectors. Total income is estimated at around 4 billion euro.

If we win this week, touring agencies and media companies will come to Turkey as soon as next week, on Monday. People in European football industry will hopefully turn their heads towards Turkey after Friday" to finalise his words.

France has emerged as the favourite to host the 2016 European Championship following the publication of UEFA's evaluation report on the three bids for the tournament.

The France bid calls for $2.1 billion to be spent on seven major stadium renovations and four new-build projects; Saint-Denis stadium is an existing venue.

On the other hand Italy's bid only one of the 12 proposed host stadia exists; eight would be revamped with three new constructions. Italy would invest $919 million on improving its stadia infrastructure.
Posted by TURKISH FOOTBALL BY AHMET BOB TURGUT