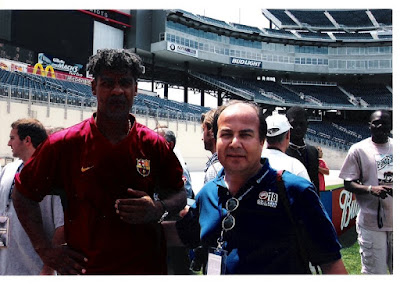 Rijkard and Ahmet Turgut back in 2003 when he was the coach of Barca....

The club stated on its website on Friday that they agreed with former Barcelona coach Rijkaard to replace Bulent Korkmaz, according to the report.

Rijkaard is expected to arrive in Istanbul, Turkey on Friday and sign a 2-year-contract with the club at a ceremony at 8:00 p.m.local time (GMT 1700).

Rijkaard, born on September 30, 1962 in Amsterdam, is a Dutch football manager and former player. Rijkaard played for Ajax, Real Zaragoza and Milan, and represented his national side 73 times, scoring 10 goals.

Rijkaard's coaching career began when he was appointed manager of the Netherlands national football team in 1998. He had previously served as an assistant coach, along with Johan Neeskens and Ronald Koeman under the managerial tenure of Guus Hiddink.

During the 2001-02 season, he became manager of Sparta Rotterdam, and then he was appointed manager of Barcelona for the 2003-04 season.

I have followed Rijkaard back in 2003 when he came to United States with Barcelona for a friendly matches.