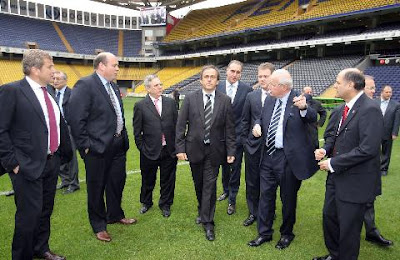 The head of the Union of European Football Associations (UEFA) visited on Thursday a Turkish stadium ahead of UEFA Cup final.

UEFA President Michel Platini visited the Fenerbahce Sukru Saracoglu Stadium in Istanbul, which will host the UEFA Cup final, in May.

Platini will later attend a ceremony at the Esma Sultan Mansion in which representatives of the Zenit team of Russia, which won the cup last year, will hand over the trophy to Turkish executives.

The UEFA Cup final will take place at the Fenerbahce Sukru Saracoglu Stadium on May 20.

"The greatest danger to football is match-fixing," Platini said. "UEFA is investing a lot to combat match-fixing. Platini also defended a ruling that banned Macedonian club FK Pobeda from European competitions for eight years for rigging the outcome of a Champions League qualifier.

"It is a clear message that all those who are implicated in match-fixing and illegal betting will not be playing again," he said. "This was done to safeguard football."

Platini was speaking at a news conference following a ceremony in which last season's champion Zenit St. Petersburg handed over the UEFA Cup trophy ahead of the May 20 final to be played in Istanbul.

Two teams from Ukraine - Dynamo Kyiv and Shakhtar Donestsk - and two German teams - Werder Bremen and Hamburg - are in the running for the title.

It is the last time the competition is held under the UEFA Cup name and format. Next season the tournament will be renamed the Europa League.

Platini also restated that he favours a system whereby a referee can stop a game completely if fans chant racial slurs toward a player.

Platini said a referee would suspend the game for 10 minutes as a warning and end the game if racial abuse continues.

"A match is nothing compared to the seriousness of racism," Platini said.