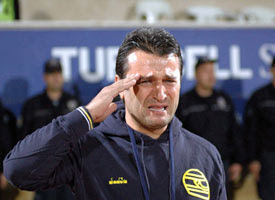 Bulent 'The Soldier' Uygun has led the club up the league.

The historical hierarchy of Turkish football has rarely been called into question, but this season something has changed. Sivasspor's humiliation of the reigning champions Galatasaray in their recent cup games and a meteoric rise to the top of league suggests that, unexpectedly, they could become only the fifth club ever to win the Super Lig title.


While Besiktas (in the early 90s) and Trabzonspor (in the late 70s/early 80s) have offered resistance to the dominance of Galatasaray and Fenerbahçe in the past, 2008/09 has seen a new force arrive in the championship race.

In the top flight since 2005, Sivasspor have not simply sprung out of nowhere, having finished 3rd in last year's campaign, but the scale of their rise has surprised many. Some dominant home form at the beginning of the season - where they have won ten of their eleven games thus far, conceding just four goals - is the key. They have made a name for themselves, not by playing the best football, but forging a winning mentality.

A number of clubs have given notice of their potential in the past, threatening to cause an upset in the title chase, but have often been found wanting towards the end of the season. Sivasspor, simply by virtue of their fighting attitude, appear different and could be set to destroy the established Turkish order if they can hold out until May.

As unfashionable as they are, no-one can query the standard of Sivas' performances this season. Backed by a hostile home environment which sees opponents arrive to face -10°C temperatures (up to -20°C if you include wind-chill factor), they rely on speedy counter-attacking and a strong desire to battle hard. A philosophy which has already seen them upset both Galatasaray and Fenerbahçe at home this season.

Pulling the strings is former Fenerbahçe captain Bulent 'The Soldier' Uygun, who was famous for his 'soldier salute' goal celebration during his playing days and began his sporting career as a wrestler. The 36-year-old manager claims to have learnt from Carlos Alberto Parreira, the Brazilian manager who masterminded his country's uncharacteristic 1994 World Cup triumph and managed Fener in 1995/96. Uygun has turned the club into genuine title contenders.

Still learning his trade, Uygun took over in early 2007 with the club rooted to the bottom of the league and led them to 7th place. He then won the 2007/08 Manager of the Year award for getting the club to 3rd position the following season and has instilled a corinthian spirit into his squad, with teamwork the priority. He has a tightly knit group of players with which to work and is backed by a strong boardroom, led by President Mecnun Odyakmaz who has said in the past: "Money is not a major concern. We are a brotherhood."

It's a good thing that money isn't important, because Sivasspor are not blessed financially. Already suffering from the fact that Turkish television only shows matches featuring the big four (Besiktas, Fener, Galatasaray and Trabzon), the club have been built on a platform of mediocrity, not wealth.

Picking up players deemed not good enough for the bigger teams, Sivas have recruited well, but without spending a vast amount of money. Their squad looks average in terms of talent, but that has been to their benefit when it comes to keeping their best performing players. Announcing that they were willing to listen to offers for star Mehmet Yildiz recently, the club were unable to raise any interest and Yildiz has gone on to net 11 goals in 19 starts in propelling the club to the top of the league.

In January, Mahmut Hanefi and Onur Tuncer joined from Fener and, with no real stars in the squad, Sivas are able to focus their attentions on their football. Israeli striker Pini Balili has returned from injury, French import Yannick Kamanan has impressed when given the chance and the club are riding on a wave of confidence in a bid to overcome the odds and finish strongly.

Balili recently wore a t-shirt with the words: ''Nothing happens through coincidence'' imprinted on it, while celebrating his side's Turkish cup win over Galatasaray, and he may be right. The league table cannot be argued with and, while these underdogs continue to improve, it is the reigning champions who have been hit hardest by their rise.

''It's high time we come to terms with the reality of Sivas,'' said Galatasaray keeper Aykut Erçetin after his team's cup defeat. But they haven't and even parted company with German coach Michael Skibbe last week, replacing him with 40-year-old club icon Bulent Korkmaz.

The upheaval surrounding the appointment - reports in Turkey had suggested that the club had offered the job to Gheorghe Hagi, only to be rejected - may hurt the champions in the short-term but it was necessary as the Turkish giants had failed to monitor the rise of the Anatolian club. Something had to change.

Two defeats and one draw against them in an 11-day period at the end of January set the wheels in motion, although the last straw came from a humiliating 5-2 defeat by minnows Kocaelispor at the 'Lions Den' a month later. 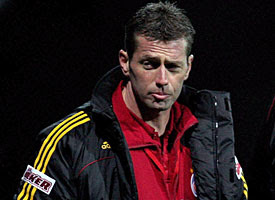 Skibbe was sacked as Galatasaray boss after a poor run.


While Skibbe admitted blame for Galatasaray's freefall, claiming that he was ''unable to establish a solid defensive formation,'' his position cannot have been helped by the mountain of praise being heaped on Sivas. Fifth in the league and eight points behind the surprise leaders, Galatasaray fans expect better after a history of success, although some will tip their hats to Uygun's men for what they have achieved already.

Many in the Turkish media have dismissed Uygun's side as another flash in the pan and backed Galatasaray to come back strongly, but only the second half of the season will determine whether or not Sivas can complete their meteoric rise by winning the title. The general feeling is that they will fall away, as Vestel Manisaspor did in 2006/07, but there is also an increasing acknowledgement that this might be the year things change.

Sivas can begin to win over the critics with a win over Fenerbahce at the famous Sükrü Saracoglu this weekend, while Galatasaray host the club on the final day of the Turkish season. By then, however, it may already be too late to stop them.