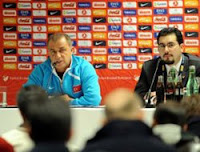 Turkey's coach Fatih Terim said on Tuesday his team would take risk to see weaknesses against Austria in Wednesday's international friendly in Vienna.

"We have respect to Austria," Terim told reporters before the match in Ernst Happel Stadium where Turkey had a quarterfinal victory over Croatia in Euro 2008 this summer.

However, Terim complained about injuries but said his team was one of the unusual national teams that all players could replace each other without any problems.

Main strikers Nihat Kahveci and Mevlut Erdinc were already out while midfielder Arda Turan and attacker Semih Senturk will miss Wednesday's game due to recent injuries.

The match will kick off at 9:30 p.m. Turkish time. German's Manuel Grafe will referee the match.
Posted by TURKISH FOOTBALL BY AHMET BOB TURGUT