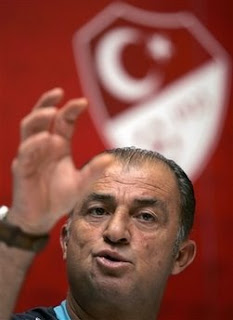 Turkish national soccer team coach Fatih Terim talks during a press conference in Istanbul, Turkey, Monday, March 24, 2008. Turkey will play Belarus in Minsk in a friendly match on Wednesday. Turkey is in Group A with Switzerland, Portugal and Czech Republic in the Euro2008, European Soccer Championship finals which will take place in Switzerland and Austria in June.
Photo:(AP)

Turkey is making final preparations for Wednesday's friendly game with Belarus in Minsk.

The friendly game with Belarus is part of getting ready for the Euro 2008 to take place in Switzerland and Austria later in June.

Turkey-Belarus game will kick off at 8:00 p.m. (Turkish local time).

IT IS HONOR TO BE WANTED BY CHELSEA TEAM BUT,I AM FOCUSED TO EURO 2008 WITH THE TURKISH NATIONAL TEAM NOW....... 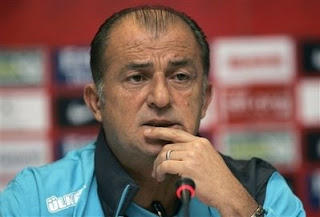 In reference to rumors that he would sign England's Chelsea soccer club at the end of this season, Fatih Terim said he would be occupied with the Turkish national soccer team until the end of Euro 2008. "I currently have no time to talk to any soccer club as I am very busy with the Turkish national soccer team," Terim also said.
Posted by TURKISH FOOTBALL BY AHMET BOB TURGUT