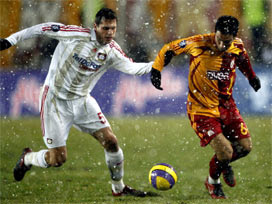 Galatasaray failed to capitalise on a number of chances as they were held to a goalless draw at home to Bayer Leverkusen in the first leg of their UEFA Cup last-32 tie.

Leverkusen's attack struggled to create any clear openings, but coach Michael Skibbe will still be pleased with the result on a snowy night in Turkey.

Neither side was able to fashion any sort of chance in a scrappy first quarter-of-an-hour, although it was Karl Heinz Feldkamp's side who showed the greater adventure.

And they tested Rene Adler in the 28th minute, but the Leverkusen keeper did a fine job of keeping out Umit Karan's shot from the right.

Leverkusen were unable to take advantage of a major mistake in the 31st minute by Galatasaray defender Emre Gungor, whose attempted clearance deflected off Sergej Barbarez and directly to Stefan Kiessling.

But Emre made up for his error by intercepting Barbarez's pass as he looked to launch a breakaway.

Arda Turan had a fine chance seven minutes before the break for the Turks, but his header from five yards went just over Adler's crossbar.

Leverkusen again breathed a sign of relief when Hakan Sukur beat his marker and crossed to Umit Karan, who could only chip his effort into Adler's arms from eight yards.

Leverkusen continued to offer little going forward, Tranquillo Barnetta's cross-shot which went wide of the upright the pick of their chances.

Galatasaray though had two chances in quick succession after 70 minutes as Jan-Ingwer Callsen-Bracker's misplaced pass was intercepted by Umit Karan, who blasted well off-target.

Sukur was then denied as he ran on to a throughball, Adler rushing out to claim the ball at his feet.

And Freier on the post cleared Mehmet Topal's back heel with 10 minutes remaining.

Leverkusen looked to snatch a winner at the death, but Galatasaray nearly stole the advantage three minutes into injury time as Adler parried a long-range shot straight to the feet of Shabani Nonda, who blasted well over the crossbar.