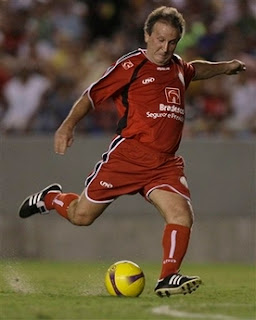 Fenerbahce coach Zico returned to his native country this week to organize a charity football match between his former club Flamengo and a team assembled from stars from around the world.

Player-organized fixtures like these are becoming a familiar feature with Brazilian crowds these days, but this one was different - the star of the show was a returning hero who still holds the record for goals scored at the 57-year-old ground.

Arthur Antunes Coimbra - better known the world over as Zico - called in a few favors and set up a match between the 1987 Flamengo team and a side made up from rest of the world - the 'Friends of Zico'.

During a 12-year career with Flamengo, Zico was a key player in a golden era.

He led the team to victory in both the 1981 Copa Libertadores and the 1981 Intercontinental Cup, and four national titles came his way either side of a two-year spell in Italy.

Now 54 and coach of Turkish champions Fenerbahce, Zico turned out in the colors of his former club, with current stars such as former Inter Milan striker Adriano, FC Barcelona midfielder Deco and Japanese international Hidetoshi Nakata on show for the Friends.

Flamengo 1987, a side made up of players from one of the club's most successful eras, beat a 'Friends of Zico' XI by eight goals to five, but the real winners were a series of charitable institutions, which received the gate receipts from a crowd of more than 35-thousand.

The Fenerbahce coach who scored twice for Flamengo was all smiles and thanked everybody for making this match possible.