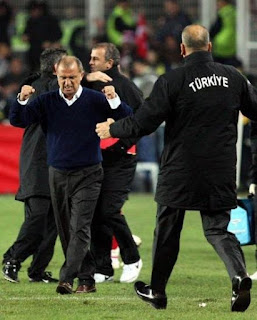 Turkey's head coach Fatih Terim celebrates his team's win over Bosnia in their Euro 2008 Group C qualifying soccer match
Turkish national soccer team defeated Bosnia-Herzegovina 1-0 in the Group C of Euro 2008 qualifying round in Istanbul on Wednesday, securing a spot in the finals in next year's European Championship.


Nihat Kahveci score the only goal of the match in the 43rd minute when Hamit Altintop found him with a cross and the Villarreal striker fired beyond Bosnia keeper Adnan Guso into the corner of the net.

After creating a string of chances in the first half, the Turkish National Team, protected their lead against a Bosnian side who rarely looked likely to score.

Turkish National Team finished second in Group C, behind Greece who had already secured their place before Wednesday's final qualifying matches. Norway, who lost to Turkey 2-1 on Saturday, missed out by finishing third one point behind the Turkish National Team.
Fatih Terim and his boy's did it hard way, but ,They did it at the end...
Kudos to Fatih Terim and his crew!...It's well deserved day after crucial times!