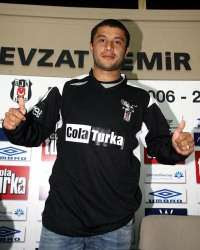 
The Chilean midfielder was presented on the afternoon following his medical tests and confirmed as a new Besiktas player.

Tello had gone AWOL from Sporting Clube, unhappy with the fact that was not given more priority under Paulo Bento.

The Lisbon club itself had been putting together a renewal package, but with his playing chances looking slim under the taciturn tactician, Tello took flight.

After seven years of service to the Lisbon Leões (Lions) the South American is embarking on a new chapter in his international career and hopes to be a key piece in the next Besiktas campaign.

Tello, shown posing in the new jersey in his Istanbul presentation, will earns close to 900,000 Euros per season in the four-year deal
WWW.GOAL.COM
Posted by TURKISH FOOTBALL BY AHMET BOB TURGUT