Turkish National team coach and players are on the same page...

We all know Terim always believes in good defense before attack...

"If we attack strongly, then our rivals will have to defend against us. We will try to score and be aggressive. That's the influence of our coach."

Turan who plays in central midfield and try and get the ball in behind opposition defenses to forward Nihat Kahveci. Emre Belozoglu and Hamit Altintop will be on either flank to allow Turan to drive forward, with Mehmet Aurelio in a holding role behind them to provide security on any possible counterattacks.

The 21-year-old Turan has been known to drift out of games late in the second half due to being physically weaker than his teammates, but he says he has toughened up and improved his tackling.

After Portugal, Turkey will play co-host Switzerland on June 11 and the Czech Republic four days later.
Posted by Unknown No comments: Links to this post

Hamit Altintop will be fit and ready for Turkey's opening Euro 2008 Group A match against Portugal on Saturday despite a late injury scare, he said on Tuesday.

"I am looking forward to the game," a team spokesman quoted Hamit as saying at a news conference at the squad's training base near Geneva.

The 25-year-old midfielder only returned to action in a friendly against Uruguay on May 25 after a two-month layoff due to a broken bone in his foot.

His club Bayern Munich said on Saturday he had suffered a muscle strain in training the previous day and could miss the Portugal match. Turkey's other Group A opponents are Switzerland and the Czech Republic.
Posted by Unknown No comments: Links to this post

A crowd of 12,000 people have paid to watch Portugal's Euro 2008 squad hold an open practice in Neuchatel, a team spokesman said.

Tickets worth 15 Swiss francs (7.21 pounds) to watch the Group A favourites at Neuchatel's La Maladiere stadium on Tuesday (5:30 p.m. British time) have sold out and are being negotiated on the black market at four times that price, Portuguese online media said.

"There will be 12,000 people to watch the practice, that's already confirmed," team spokesman Antonio Florencio said over the telephone from Neuchatel.

Portugal arrived to a rousing welcome from an estimated 10,000 crowd of expatriate Portuguese at their tournament hotel in the lakeside city on Sunday evening, media reported.

"Neuchatel is a little piece of Portugal in the middle of Europe," said maisfutebol.iol.pt

Carlos Godinho, the squad's technical director, said Portugal were charging for two training sessions to help meet high costs of their participation in the tournament. There is another open session scheduled for Sunday.

"We are the only national team that has paid training sessions, but we're also the only one that will have training in front of 12,000 people," he told reporters.

However, fans were less happy with the large security operation surrounding the team, whose hotel has been declared out of bounds to anyone not attached to the squad, reports said.
There was a security vessel on the lake to ensure no-one got within 300 metres of the hotel grounds and large black panels around the hotel to prevent contact with players.

Portugal, who trained twice behind closed doors on Monday, meet Turkey in Geneva on Saturday in their opening group match. They also face co-hosts Switzerland and Czech Republic.

Source:(Reuters)
Posted by Unknown No comments: Links to this post

ZICO:“My problem with Fenerbahce is not money, but professional issues.”

In the recent interview on Sb Tv in Brazil, Zico said “My problem with Fenerbahce is not money, but professional issues.”

Zico, is set to leave Fenerbahce after leading them to the Champions League quarter final last season, has been mentioned as a possible replacement for Sven Goran Eriksson for Manchester City team.
Zico has admitted that he would love to test himself in The Premier League.

I would like to work in England,” Zico told Sbs TV.
“My path is still in Europe. I thank Fenerbahce for giving me a chance and I repaid their support with good work on the field.

“I have some possibilities and I hope to resolve one as soon as possible.

“My problem with Fenerbahce is not money, but professional issues.”

It looks like Zico Era is over for Fenerbahce...
Posted by Unknown No comments: Links to this post

Yildiray Bastürk will not be playing for the Turkish team as long as Fatih Terim is the manager.

In an interview with German sports paper 'Der Kicker', Bastürk revealed his frustration after missing out on the European Championships.

"I will never play under Terim again," said Bastürk who has made 49 appearances for the national team so far.

"I like playing for the Turkish team, but as long as Terim has the reigns, there's no point for me."

There is hope for the player though, as it seems likely that Terim will be making a move to a club team after Euro 2008.
Posted by Unknown No comments: Links to this post

Nobel winner Turkish novelist Orhan Pamuk says football(soccer) in Turkey serves nationalist and xenophobic thinking, but he would still be supporting the country's team at Euro 2008. Pamuk said in an interview with the Germany's weekly Der Spiegel magazine that football(soccer) in Turkey had become "a machine for the production of nationalism, xenophobia and authoritarian thought."

Pamuk referred to an ill-tempered match against Switzerland in November 2005 when the national side missed out on qualifying for the 2006 World Cup. Players and officials from both sides were involved in a brawl at the end of the match.

"That was unethical and unacceptable, especially how the Turkish newspapers reported it. Failure is blamed on the referees and some sort of conspiracies. Terrible," he was quoted as saying.

However , Pamuk, said that he was "of course for the Turkish team at the European Championships" even though Turkey coach Fatih Terim was "an ultra nationalist."

Turkey's first game at the tournament is against Portugal in Geneva on Saturday, when Pamuk also celebrates his 56th birthday.
Posted by Unknown No comments: Links to this post

ANOTHER BAD NEWS FOR TERIM!.. 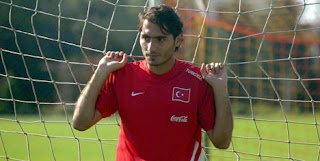 THIS TIME HAMIT ALTINTOP BROTHER OF HALIL ALTINTOP IS HURT

Hamit Altintop is a doubt for Euro 2008 after picking a thigh injury over the weekend during the international friendly with Uruguay.

The midfielder made the trip to Germany to show his leg to doctor in chief Hans-Wilhelm Muller-Wohlfahrt, who does not seem to be very optimistic over his chances of playing in the first game against Portugal, and even the rest of the tournament.


“If Altintop fails to recover fitness before his country’s first match at the tournament, coach Fatih Terim would be advised to call up a replacement,” a Bayern spokesman told the club’s official website.