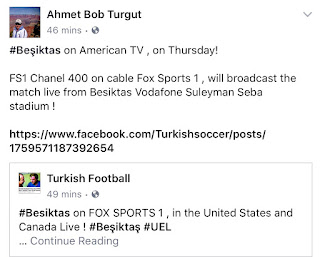 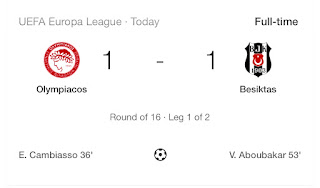 Olympiacos had offered little, but provided the game with a much-needed spark in the 36th minute.
Karim Ansarifard's teasing left-foot cross from the right flank picked out Cambiasso and the he powered his header past Fabricio.
The home side almost doubled their lead just after the break as Alberto Botia's diving header flashed narrowly wide, but moments later, the left-back was inadvertently involved in gifting Besiktas an equaliser.
It was his routine backpass that goalkeeper Leali scuffed straight to Aboubakar and the Cameroon striker raced to the edge of the box before rifling home a low shot.
The visitors should then have taken the lead on the hour-mark, but Leali at least partially redeemed himself by making a fine save at the feet of Babel who had been played in by the increasingly influential Quaresma.
And the Portuguese winger linked up well with Babel again two minutes later, this time the Dutchman just failing to convert his cross at the far post.
Dusko Tosic then drew another save from Leali with a header from a Quaresma cross and Anderson Talisca also went close late on, firing wastefully over from just inside the box, but they at least have an away goal to protect.
Posted by Unknown No comments: 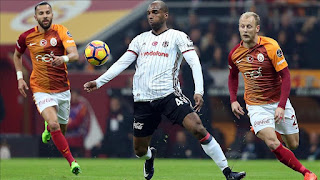 Besiktas beat Galatasaray 0-1  on Monday and extending their lead at the top of the Turkish Super League .

Anderson Talisca's deflected free-kick deceived goalkeeper Fernando Muslera on the 47th minute, giving his team a vital 1-0 lead.
Besiktas started the match at a controlled pace, but  Galatasaray was the more attacking outfit, with contributions from winger Armindo Bruma and German striker Lukas Podolski.
After important derby victory in Galatasaray's nest , Besiktas increased their points haul to 50 and continue to lead the league, four points ahead of second-placed  Basaksehir.
Galatasaray, meanwhile,  with 40 points, and 10 points behind Besiktas on third place !
After the league's weekend matches, second-placed  Basaksehir managed to beat Osmanlispor 1-0 in Ankara to increase their points total to 46.
On Sunday, Fenerbahce could not halt their run of poor performances and dropped two more points, drawing with bottom-placed Gaziantepspor 1-1.
Fenerbahce and Galatasaray  well behind Besiktas after this weekend
12 weeks to go ,the title race , pretty much between Besiktas and Buyuksehir !
Basaksehir is four points behind Besiktas ...
Clearly, this was a huge win for Besiktas but nothing is guaranteed yet!
Besiktas has the advantage but they can't letdown and be comfortable...
Between Europa League matches and domestic matches , they need to be focused all the time .
As coach Senol Gunes said, there work is not done yet !
"It's to early to claim the championship " he said...
I agree with Senol Gunes .

The match in Besiktas's Vodafone Arena saw the Black Eagles control the game from the very start, earning a comfortable 2-1 victory over the Israeli visitors.

Thanks to Aboubakar's first ever Europa League goal, Besiktas managed to control the pace and did not let Hapoel Beer Sheva threaten the home side’s goal.

However, despite leading the first half 1-0, Besiktas could not hold on and the visitors equalized on the 64th minute when Anthony Nwakaeme completed a left-wing cross with a low left-footed shot.

Brought on in the 79th minute, in-form striker Cenk Tosun made the score 2-1 near the end of normal time minute with a shot delivered after driving into the edge of penalty area.

With the win, Besiktas moved into the last 16 and are the only Turkish team left in European club competitions.
Posted by Unknown No comments: 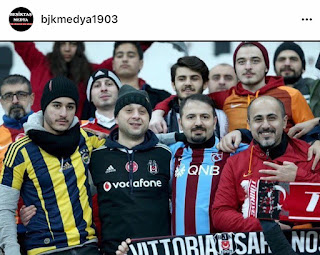 
Thousands of football fans came out in a show of solidarity on Wednesday for an emotionally-charged first match after twin bombings outside the Istanbul stadium of top Turkish team Besiktas.
Waving Turkish flags and whistling, fans made their way to the stadium after 44 people were killed on Saturday in an attack claimed by Kurdish militants.
Besiktas was playing on Wednesday against Kayserispor in a Turkish cup match at its new arena, on the shores of the Bosphorus.
A mournful silence was broken by fans making their way to the game, chanting "martyrs never die, homeland not divided" -- slogans of solidarity and patriotism rather than the usual team slogans, an AFP correspondent said.
Later inside the stadium, the slogans were repeated as fans sought to pay tribute to those killed and show a united front.
A car bomb exploded on Saturday outside the stadium and less than a minute later, a suicide attacker blew himself up next to a group of police officers at a nearby park.
Some 37 police officers and seven civilians were killed in the blasts claimed by the Kurdistan Freedom Falcons (TAK), which is seen as a radical offshoot of the outlawed Kurdistan Workers' Party (PKK) listed as a terror group by Turkey and its Western allies.
One of the Besiktas coaches Veyiz Oguz said Turkish football fans were united in mourning.
"Right now, Galatasaray fans are with us, Fenerbahce fans are with us," referring to Istanbul's two other big teams.
'All united'
Kayserispor fan Mehmet said he came all the way from the central Turkish city of Kayseri for Wednesday's match.
"Today, we Trabzonspor fans, Besiktas fans, Galatasaray fans are all united," he told AFP.

"God willing these incidents end and our matches can occur peacefully," he added.
Seyma, a female fan of Istanbul top flight Galatasaray, said: "Today is the day to show unity," adding that she hoped "friendship will win today. Turkey will win."
Besiktas midfielder Olcay Sahan took two Turkish police officers by the hand to the field and the audience applauded, an AFP photographer said.
Besiktas coach Senol Gunes and goalkeeper Tolga Zengin also laid wreathes on the players' benches.
A sea of flowers, including carnations coloured the red and white of the Turkish flag, have been left outside the stadium, along with scarves from all of the Turkish teams. An imam recited from the Koran at the site on Wednesday evening.
Besiktas said this week that money from tickets sold for Wednesday's match would go to victims' families.
Anil Akbulut, a fan of one of the other Istanbul giants Fenerbahce, said what mattered was not the match but the solidarity.
"What we experienced was painful," he said. "It doesn't matter which team I support. I know that the ticket proceeds would go to martyrs' families and that's why I came with my fiancee to watch the game."
"We invited fans from all teams," Hakan Ozkose, a Besiktas board member, told AFP. "We made the decision in order to show we are one heart against terror."

Besiktas caught up with Basaksehir in the 14th week , they both have 32 points on top .

While Galatasaray won at home, Fenerbahce went down in Antalya !

Fenerbahce's Sow scored bicycle kick goal but it was called back by controversial referee Cuneyt Cakir .... 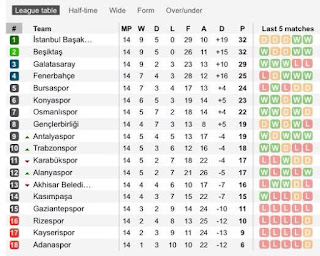 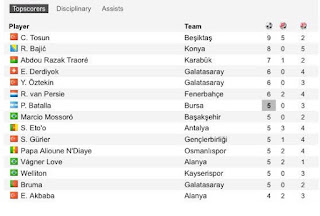 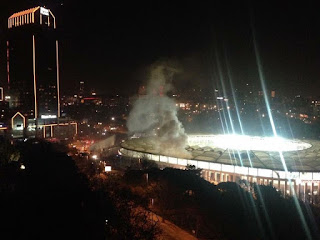