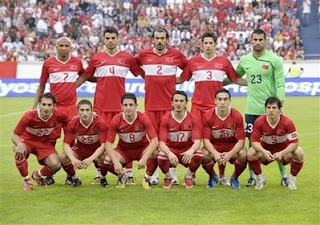 Turkey put in their most impressive performance of their warm-up matches for Euro 2008 here on Thursday as they eased to a 2-0 win over Finland.
.
Goals by Middlesbrough's Tuncay Sanli and Semih Senturk, leading scorer in the Turkish championship last season, gave Turkey a deserved win and will have done them no harm of good ahead of their opening Euro 2008 Group A match against 2004 finalists Portugal.
.
While Tuncay and Semih got the goals it was the young Turk Mevlut Erdinc that caused interminable problems for the Finnish defence, as the striker, who plays for French First Division side Sochaux, twisted and turned them everywhere.
.
Equally encouraging for fiery coach Fatih Terim was that his defence re-enforced by Servet Cetin and Mehmet Aurelio showed much more resolve than in their previous two matches which saw them beat Slovakia 1-0 and then lose 3-2 to Uruguay.
.
Tuncay opened the scoring in the 15th minute, after good work by Sabri Sarioglu and Semih added a second two minutes from time after seizing on a ball from Kazim.