It is time for Trabzon and Bursa to do it

After Fenerbahce advance in the Champions League on Tuesday,
it is time for Trabzonspor and Bursaspor do it same thing...

They are both at home and playing in front of their fans,,,,

A new coach Mustafa Akcay warned his players not to be overconfident against Minsk team.

The advantage is on Trabzon side but, they could not give up any goal against Minsk !

That could spell danger for them...

On the other hand, Bursaspor tied 2-2 in the first leg match against Vojvodino team from Serbia.

On the papar Bursaspor has a good team, playing in front of  their own fans should give them 12th man , power.

Scoring two away goals in the first leg match is big plus for Bursaspor.

Under normal circumstances, both teams should advance and book their tickets to Europa League playoffs.

Bursaspor vs Vojvodino match will start at 8.30 local Turkey time (1.30 ET ) and Turkish TRT Spor  will bradcast the match live...

On the other hand Trabzonspor vs Minsk match will start at 9.00 pm local time (2.00 ET) and  will broadcast by D Smart Spor.
Posted by TURKISH FOOTBALL BY AHMET BOB TURGUT No comments:

Emirates Cup organization made a nice video highlights which Galatasaray team from Turkey won . You could watch the highlights of the Emirates Cup 2013 highlights video by clicking the link below
http://www.youtube.com/watch?v=d7H6rfvail0
Posted by TURKISH FOOTBALL BY AHMET BOB TURGUT No comments:

Fenerbahce qualified for the play-off rounds after Tuesday's win.

The two sided drew 1-1 in the first leg game in Austria.

in the second half of the match..

Do or Die for Fenerbahce...

It is  put up or shut up time for Fenerbahce....

Fenerbahce will be at home against  Austria’s Red Bull Salzburg tonight...
A last-second penalty goal from  Cristian Baroni in the first leg match in Austria gave a big hope last week!  Tonight's match will not be that easy for Fenerbahce,,,,

They could easily score goal or goals in Kadikoy, tonight.

That is why , keeper Volkan Demirel and Fenerbahce defense should have a flawless match. 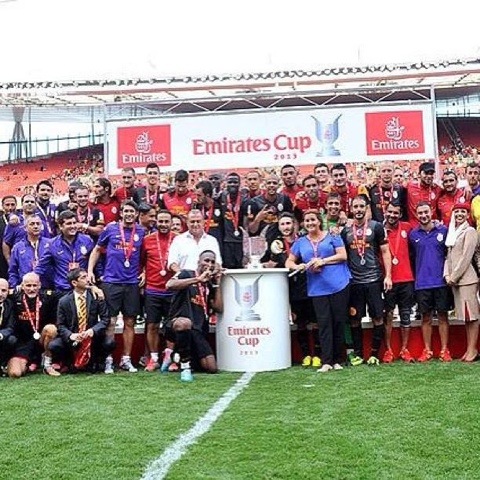 Didier Drogba came off the bench to score two late goals in a 2-1 victory against Arsenal for Galatasaray to win the Emirates Cup on Sunday.One of Arsenal’s biggest foes during his years at Chelsea, Drogba came back to haunt the Gunners again. He sealed victory for his side in the 88th minute when he collected a pass into the box from Wesley Sneijder, dribbled past Per Mertesacker and struck the ball home.
He brought Galatasaray level only nine minutes earlier when he converted a penalty after being pushed down by Bacary Sagna.Arsenal dominated play in the first half and scored in the 39th minute when Theo Walcott’s cross cut through the defense and surprised goalkeeper Fernando Muslera.Galatasaray finished the competition with nine points, ahead of FC Porto with six and Arsenal and Napoli with four.
Source : AP
Posted by TURKISH FOOTBALL BY AHMET BOB TURGUT No comments:

Fenerbahçe, Beşiktaş to participate in Euro draws, despite UEFA ban

Fenerbahce and Besiktas will participate in today’s European competitions’ qualifiers’ draws, after the Court of Arbitration for Sport (CAS) issued a stay of execution on their bans from EUROPE .
The two Istanbul clubs announced that they would participate in the draws, despite the ban handed to them by European football’s governing body.

Fenerbahçe was given a two-year ban while Besiktas was handed a one-year suspension due to the two teams’ match-fixing convictions, UEFA had ruled earlier this week.
The two teams then made an application to the CAS, which confirmed on July 17 that it had “registered an appeal filed by Fenerbahce SK and a request for provisional measures filed by  Besiktas  against UEFA, in relation to the decisions taken by the UEFA Appeals Body on July 10 and 11, 2013.”

The CAS also accepted Fenerbahce and Beşiktaş’s requests for a stay of execution.

Here is the Fixture for Turkish Super League .......