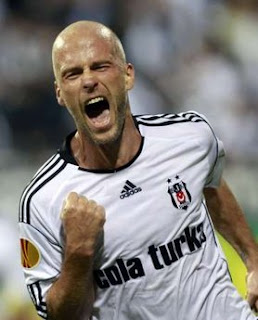 Besiktas' Fabian Ernst celebrates after scoring a goal against CSKA Sofia during their Europa League Group L soccer match in Istanbul.(PHOTO BY REUTERS)

The only team from Turkey, who is left in the Euro league group competition Besiktas won the hard way, against CSK Sofia with a last minute goal before the Sunday big show down against Fenerbahce..

This was very important win for Besiktas team to start the group matches with a win in the Group L.

Besiktas of Turkey struggled to create much for large parts but they started to click after Ricardo Quaresma came in to the match around 60th minute.


Quaresma's first action was to swing in a cross which CSKA goalkeeper Rais M'Bohli held well.

Besiktas started to string chances together but Tabata was unable to beat CSK Sofia keeeper from 12 yards....

Besiktas kept the pressure with Hilbert shooting over before a long-range shot from Quaresma was cleared by the opponent defender...


The pressure finally paid out in the 90th minute when Quaresma was brought down by defender Yanchev and Ernst made the decisive touch from Guti's free-kick to score golden last minute goal for Besiktas.